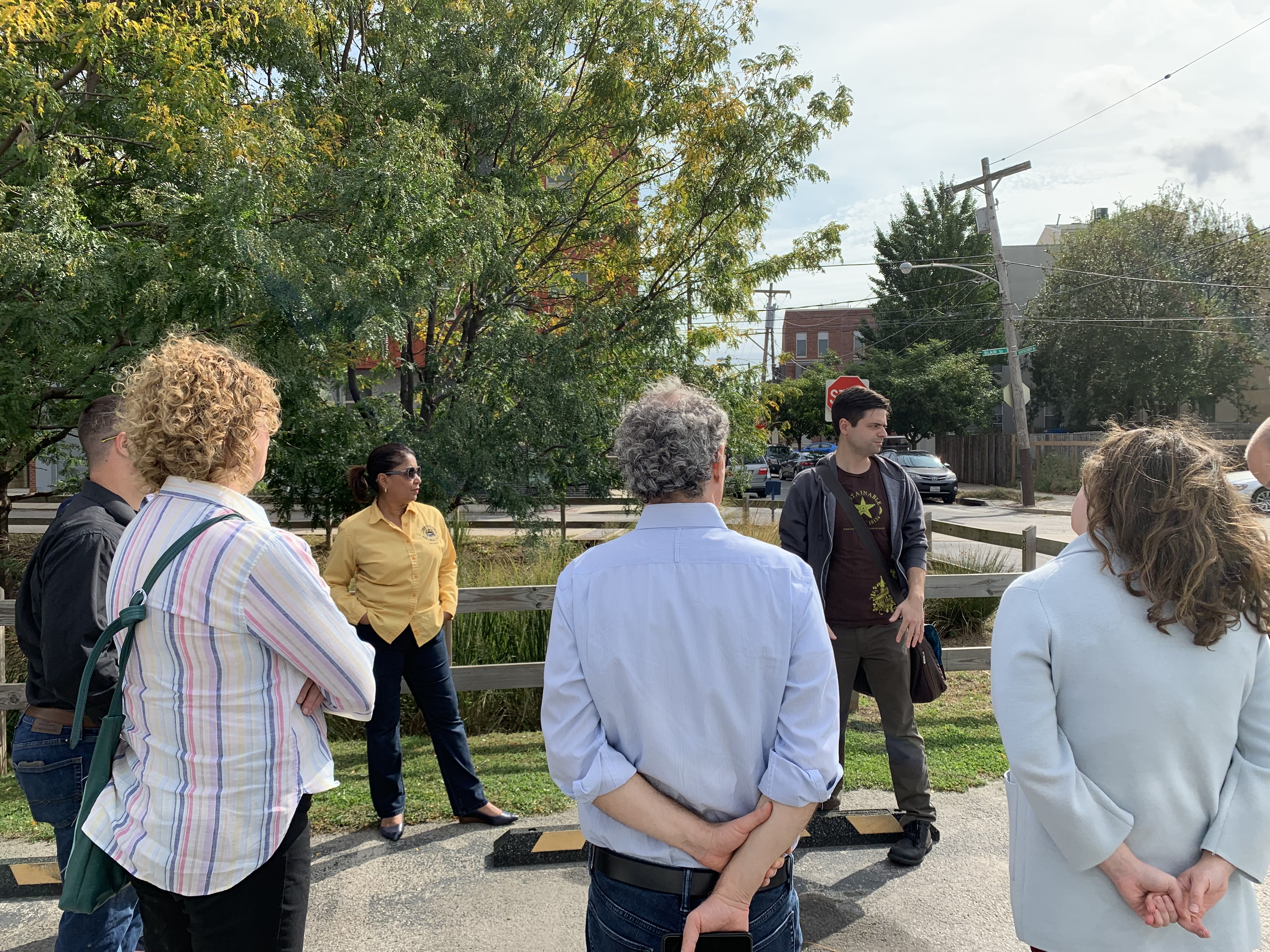 Often times, showing is better than telling. That’s why PennFuture last month organized a bus tour in an effort to highlight the social, economic and environmental benefits of green stormwater infrastructure in Philadelphia.

In addition to presenting an opportunity to discuss the many benefits of green stormwater infrastructure, the bus tour also allowed for a discussion about the challenges that come with aligning and integrating various city programs and initiatives.

PennFuture’s bus tour attracted prominent officials and business leaders from the city, including Philadelphia city Councilwoman Maria Quiñones-Sánchez, a staff member from her office, as well as experts and partners at Meliora Designs, Roofmeadow, Rodriguez Consulting LLC., and the Sustainable Business Network of Greater Philadelphia.

Our first stop was to visit the American Street Improvement Project starting at Jefferson Street. American Street was once an industrial corridor, spurred by the Reading and Philadelphia Railroads that were routed through the area. The commercial strip was filled with factories, repair shops, and freight yards. Beginning in the late 1800s, this corridor produced tens of thousands of jobs for the region. But for the last several decades, the post-industrial corridor has been significantly blighted.

The final design incorporates 42 green stormwater infrastructure systems including rain gardens, bioswales, subsurface stormwater trenches, and tree pits. Each time it rains, GSI systems will collect more than 1.4 million gallons of stormwater runoff from the right-of-way, which will equate to more than 50 greened acres towards PWD’s program for waterway pollutant reduction.

The American Street Improvement project is a unique approach to green stormwater infrastructure design and construction. The project design required extensive community outreach and engagement to ensure that the corridor was accessible to all stakeholders. Councilwoman Quiñones-Sánchez’s office has been a leader in ensuring all stakeholder priorities are incorporated into the project design. During the tour she acknowledged that at the end of the day, no one stakeholder received everything they asked for.

Our second stop was the Shissler Recreation Center, a portion of Kensington’s Big Green Block. The block was a collaboration of public, private and non-profit partners to turn a 20-acre blighted piece of vacant land strewn with trash and cinders into new green space. Councilwoman Quiñones-Sánchez is a strong supporter of the Shissler Recreation Center and lauded the success of the park. We were joined by Andrew Goodman from the New Kensington Community Development Corporation who shared with us the story of the Big Green Block and what it took to make the project possible. NKCDC continues to maintain the green stormwater infrastructure through the Soak it up! Adoption program.

The block includes the Shissler Recreation center, the Kensington High School for the Creative and Performing Arts, a spray park, Palmer Doggie Depot dog park, and Stan “The Cutman” Field for kids. Rain gardens, percolating astroturf, embedded planters, and a basketball court with underground stormwater runoff collection chambers are incorporated into this green space to capture 95 percent of the blocks’ stormwater run-off on site. The Big Green Block project began in 2008 and was made possible through partnerships with local residents, the New Kensington Community Development Corporation, the Philadelphia Water Department, the Pennsylvania Horticultural Society, the Mayor’s Office of Sustainability, the Mural Arts Program, Philadelphia Parks & Recreation, and the Philadelphia School District.

During the return drive to our ending destination, the partners had an opportunity to discuss with Councilwoman Quiñones-Sánchez the challenges they are facing with incorporating green stormwater infrastructure into designs for the Rebuild Initiative’s investments in the city’s parks, recreation centers, playgrounds, and libraries. The Waterloo Recreation Center is one of those sites receiving investments from the Rebuild Initiative, that is also slated to receive green stormwater infrastructure investments. Initially planned to be completed in late 2017, the project has run into delays in moving forward at the city level.

As part of PennFuture’s work to elevate the importance of green stormwater infrastructure in Philadelphia with elected leaders and community residents, we are developing city council champions to advocate for a strong program. Philly green stormwater infrastructure bus tours are one way we are engaging with city council members around this important issue for the people of Philadelphia.