Philadelphia Has an Urban Planning Problem 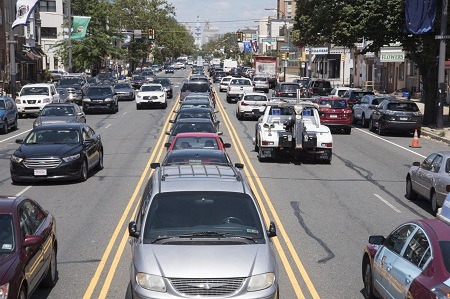 Philadelphia has an urban planning problem.

In the wake of the clarion call to action from the Intergovernmental Panel on Climate Change, we can no longer delay in securing a city that is clean, green, and carbon neutral. Philadelphia public officials and residents must recognize that the insatiable hunger for more pavement and impervious surface will only further exacerbate the impact of climate change that is already being felt in neighborhoods across the city.

I was recently afforded the opportunity to publish a letter in The Philadelphia Inquirer on the importance of prioritizing green space and green infrastructure in civic space related to Inga Saffron’s column on the new Headhouse Plaza. Many have written about the obvious flaws in the design and construction of the new plaza. The space does not provide any protection from the sun or rain. It is visually unappealing and offers no physical comfort to anyone who may need it. Headhouse Plaza lacks basic amenities and offers little in the way of the forward-thinking approach necessary to urban planning as we continue to deal with a changing climate. What it lacks in vision, it is clear that the space is exactly what some neighbors lobbied for throughout the design process.

The architect on the project said this: “It started out with some more greenery, but that was sort of scaled back because of some of the near neighbors. They had concerns about greenery. People didn’t want a place where all the dogs were going to go.” (emphasis added)

One neighbor neatly summed up the major issue: “We love it, it’s a great improvement. The parking is nice. We were afraid they were going to take away the parking.” (emphasis added)

Previously, the square contained 40 parking spaces. The new design cut the number of spaces to 30. Reducing parking was a hot topic of conversation throughout the design and construction of the new plaza. When the Art Commission ultimately approved the design, commissioners “…wondered if such an act would provoke controversy, as parking is the third rail of both Philadelphia city politics and urban design.”

Philadelphia made significant strides to reduce parking minimums in 2012. Despite this and the efforts of other cities across the country to eliminate parking minimums entirely, we have seen attempts to reverse the progress made in Philadelphia time and time again. Most recently, the Philadelphia City Planning Commission announced efforts to update zoning rules in northern Germantown that would effectively mandate increased parking minimums in that area by requiring that new buildings with ten or more apartments or condos have a parking lot or garage. The city has framed this effort as part of its Philadelphia2035 comprehensive plan to manage growth and development in Philadelphia, but significantly increasing pavement and impervious surface does nothing to address the climate emergency we face in 2021 let alone the increasing heat and precipitation we must be prepared for in 2035.

More pavement and impervious surface will only make Philadelphia more vulnerable to warmer, wetter weather. There is growing evidence and understanding that urban spaces consistently suffer from more extreme temperatures due to an absence of green space. We also know that racist practices like redlining have disproportionately impacted communities of color as they grapple with hotter temperatures than predominantly white neighborhoods. Impervious surface also directly leads to increased polluted runoff in our water and increased flooding in our streets due to aging infrastructure that cannot properly handle a 21st century climate.

There is such a strong temptation to continue feeding the need for parking because of the powerful forces behind the parking industry and the vocal community members who do not want green space because it attracts too many dogs. Philadelphia may have been a parking diet since 2012, but it is time to quit the feeding frenzy for good. We must rethink community spaces and engage in processes that inform and educate about the imminent danger of climate change and the need to build more nature into our built world.

There are neighborhoods across Philadelphia that are suffering from urban heat island effect, and some people live in constant fear that their homes will flood every time it rains. Investments in green space and green infrastructure will help neighborhoods combat these dual threats.

Eastwick is one area that needs help now to protect itself from increased flooding and build a neighborhood that is more resilient to the effects of climate change. Neighbors are actively engaged and have been fighting for decades for investment in their community to address a legacy of broken promises and deliberate disinvestment. Urban planning and development could serve as a model for the entire city with the proper approach and understanding of climate challenges to come.

Luckily, there is already a plan that broadly outlines what could be possible on city-owned land in Eastwick. While Philadelphia City Councilmember Kenyatta Johnson has taken the prudent approach to halt city development in the area, the Lower Eastwick Public Land Strategy does contain promising suggestions for additional green space and green infrastructure that should be the primary focus of any development in Eastwick.

PennFuture strongly supports Councilmember Johnson’s call for $500 million in federal infrastructure funding to be allocated to Philadelphia for flood mitigation efforts in Eastwick. This funding would help clear the way for natural solutions to the area’s climate problems. Though there are certain aspects of the Lower Eastwick Public Land Strategy that should be discarded due to other development projects in the area and their negative impact on climate readiness, the strategy points to multiple parcels that will provide open space, preserve existing wetlands, and implement green infrastructure to combat flooding.

Humanity has directly confronted nature with a built world for the past century – often at the expense of its most vulnerable communities. Now, we are faced with natural problems that will not be solved by levees, earthen berms, or more pavement. In the face of growing evidence that our built world is exacerbating the heat and flooding that we experience, it is time to set aside the strategies of the 19th century and adopt natural solutions for the 21st century.

This critical work will require a concerted effort from all levels of city government. It will require public officials to engage with residents, educate their constituents on the climate challenges we face, and be willing to ignore concerns about reduced parking and dogs that like trees and grass. Philadelphia remains a leader in helping residents deal with climate change. It is time to build on that foundation and lead the charge for green space and green infrastructure in urban planning and development.