May 4, 2017 by Rob Altenburg, Senior Director for Energy and Climate
Next Post

(UPDATE: Our original data, obtained through a Right to Know request, showed a 20 percent year-over-year increase in methane emissions between 2014 and 2015. As of May 24, 2017 the PA DEP has released their reports and are now showing a 28 percent increase year over year.)

Every year since 2011, the Pennsylvania Department of Environmental Protection (DEP) has asked drillers and owners of compressor stations to report the amount of air pollution they emit. We saw a dip in emissions of methane—the primary constituent of natural gas—in 2013 as a new set of regulations, the federal New Source Performance Standards, began to phase in, but emissions are once again on the rise.

Data from the Energy Information Agency (EIA) shows that natural gas production from such wells in Pennsylvania increased by more than 12 percent between 2014 and 2015. But the most recent inventory data shows that between 2014 and 2015, methane emissions rose more than 20 percent—an alarming increase. Any time emissions are rising faster than production, it’s clear that voluntary efforts to cut emissions are not working.

Is the industry emitting more now, or was it inappropriately under-reporting emissions in previous years? While both may be true, new reporting alone doesn’t seem to be enough to explain the large jump in emissions. These inventories are industry’s self-reported data, and as the Environmental Protection Agency (EPA) has previously noted, actual emissions could be considerably higher than what is being reported. Recent studies in Pennsylvania have shown our local methane concentrations are increasing much faster than the global average.

Back in 2012, the largest source of methane emissions industry reported was well completions, or the process of readying a well for production. At the time, it was common practice to vent gas straight to the atmosphere. Thanks to new federal standards, operators must now capture that gas. As a result, well completion emissions dropped over 90 percent between 2012 and 2014 and that by itself explained a dip in total emissions. These sensible standards  kept thousands of tons of methane from being emitted each year, but these emissions are now rising again as drilling increases. 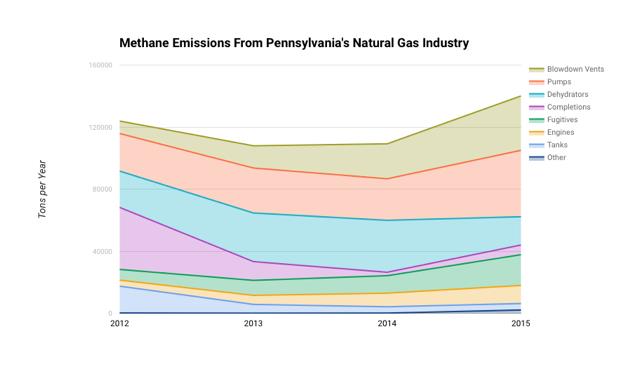 One of the key lessons we can draw from the data is that rules work, and Gov. Tom Wolf has the ability to act on behalf of Pennsylvanians and their communities to effect common-sense standards. The Pennsylvania DEP has proposed a new set of general permits for the industry that would close the permit exemption for wells and add important new controls such as more frequent leak detection and repair and both wells and compressor stations. That is a good start, but those permits will only apply to new sources—not the thousands of existing sources including wells and compressor stations that are operating today. Cost-effective technologies exist that can cut emissions from these existing sources for a penny per thousand cubic feet of gas produced.

As the Trump administration works to eliminate air quality standards, we need Gov. Wolf to honor his promise to cut harmful methane emissions at the state level for the sake of Pennsylvania’s health and its economy. Regrettably, state Sen. Guy Reschenthaler has sponsored a bill, SB 175, that would forever tie the hands of our state and put the Washington D.C. lobby in charge of Pennsylvania’s air. That is simply unacceptable

Pennsylvania has an oil and gas air pollution problem, and it’s getting worse. It’s critical that our elected officials in Harrisburg take the lead on action to address the methane emissions that are harming public health and exacerbating the climate-borne chaos—floods, droughts, wildfires—we continue to experience. And since methane is the primary component of natural gas, cutting emissions means that we’re not wasting our natural resources.

First Person: My Experience at the Harrisburg March
May 11, 2017 by Ezra P. Thrush, Senior Director of Government Affairs