Subsurface Storage is a Promising Addition to our Renewable Energy Arsenal 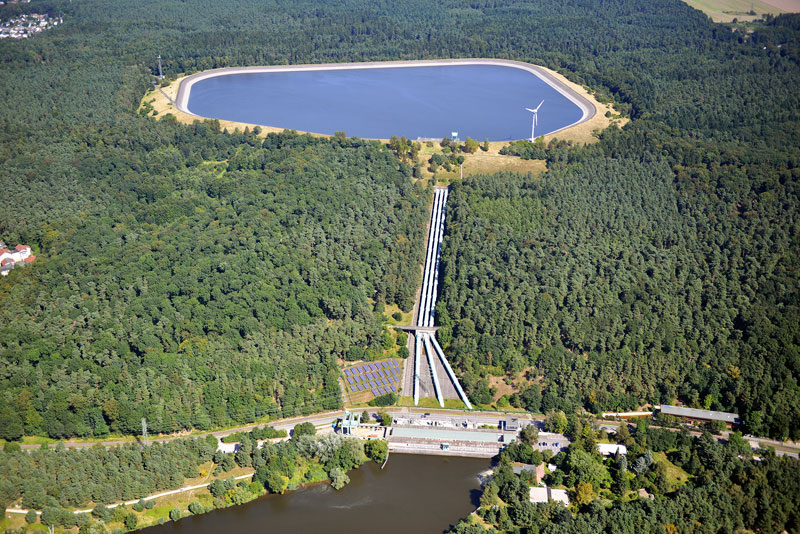 Batteries, storage, renewables: you’ve probably heard these terms a lot alongside each other when the topic of clean energy comes up. One of the true barriers facing Pennsylvania’s transition to a clean energy future is the need for a balanced grid and for on-demand power. We know this to be true, which is why we’re excited to talk about some of the new technology that is being developed with help from Pennsylvania’s own brain trust that can help advance a cleaner future and environment in Pennsylvania and across the nation.

Over the past several weeks, PennFuture has been researching and interviewing entities and individuals working on bringing a new technology that uses the principles of Pumped Storage Hydropower (PSH) to communities across the United States. The idea behind PSH as it relates to renewable energy is simple: when demand is high, the grid simply draws energy directly from renewable sources. As demand drops, that clean energy is still being generated, but the excess is then used to pump water between two reservoirs at different elevations. When demand goes back up, the water is released, and its energy is captured and used by consumers on the grid. PSH is often considered the gold standard for energy storage because of its efficiency and ease of use. In fact, PSH currently accounts for 95% of all utility-scale energy storage capacity in the country.

PSH plants operate much like conventional hydropower plants, except PSH has the ability to use the same water over and over again. However, traditional PSH has drawbacks: it requires elevated terrain and there are environmental concerns about ground- and surface water impacts, so it is inherently geographically limited in its deployment.

Enter the company Quidnet Energy. Quidnet, working with researchers at the University of Pittsburgh, claims to have developed a novel approach to pumped hydropower that will solve these issues: Geomechanical Pumped Storage.

How Does it Work?

Stated very simply, Quidnet’s Geomechanical Pumped Storage (GPS) system works by taking the ideas of PSH and literally inverting them by moving the storage underground. The system works in three steps: first, when electricity is abundant, the system pumps water from a pond down a well and into a thin lens of water contained in the bedrock. Second, the well is closed, keeping the energy stored under pressure between rock layers for as long as needed–usually one to two days. Third, when electricity is needed, the well is then opened to allow the pressurized water to pass through a turbine in order to generate electricity, and return to the pond ready for the next cycle. The natural elasticity of the rock performs like a spring and holds the water under pressure until it is needed, at which time it is released through a hydroelectric turbine to produce electricity to send back to the grid. Quidnet describes themselves as an inverse fracking: the same technology is used, but instead of fracturing the bedrock, they seek to keep it sealed.

Quidnet has emphasized that its GPS system retains what works from traditional oil and gas drilling without the massive environmentally degrading impact. From their website, Quidnet states that their system “is built on conventional drilling technology and off-the-shelf hydropower equipment. Facilities operate with closed-loop water systems, designed for conservation against evaporative loss. They also claim that there has been little-to-no fresh groundwater contamination due to several factors: first, being away from water wells, second,  and the fact that their system is encased in concrete, and third, because they use farm-quality fresh water for their storage, so that even water that does escape does not carry the hydrocarbon or other water contamination that is involved with oil and gas fracking.

Quidnet also recognizes that the term “fracking” carries certain connotations and concerns, such as induced seismic events. Quidnet states that they avoid these concerns in two ways. First, their technology works at a much shallower level than oil and gas producing fracking: 1000-1500 feet subsurface, instead of the 5,000-20,000 feet below subsurface. Second, Quidnet states that, where they currently operate, they do not do their work near fault lines.

Quidnet has operations, in place or planned, in upstate New York, Texas, Ohio, California, and even Alberta in Canada. Recently, in March of 2022, Texas-based CPS Energy, the largest municipally-owned electric and natural gas company in the country, entered into a 15-year commercial agreement to explore installing up to 15 MW of Quidnet’s GPS system. The agreement will kick off with a 1-MW project that will pump water into drilled wells and store it under pressure, providing up to 10 hours of long-duration energy storage.

Can It Be Implemented in Pennsylvania?

While Quidnet touts their system as versatile and adaptable to the geological diversity of the United States, some regions are more favorable than others. Due to the geological makeup of Pennsylvania, especially in the Western portion of the Commonwealth, Quidnet believes our region could be the next great expansion for their subsurface storage system program.

Of course, Pennsylvania already has plenty of wells drilled: the DEP estimates that there are between 100,000-560,000 abandoned and orphaned gas wells left to clean up and plug across the state. As a result, one Quidnet representative accurately, if unflatteringly, described Pennsylvania’s bedrock as “swiss cheese.” While one’s initial reaction to hearing about Quidnet’s plans to drill more might be that the last thing Pennsylvania needs is more holes in the ground, the good news is that Quidnet has reported to PennFuture that they actually have a way to utilize these wells. By using these pre-existing uncapped wells to help map and site locations for their GPS system, Quidnet can turn this potential liability into an asset. They call this the “Clean Energy Geologic Resource Assessments” (CEGRA) initiative. Quidnet hopes to double down on President Biden’s efforts to find and cap orphaned wells by building out the orphaned well program to develop these new clean energy resources.
We Must Build a Green Energy Pennsylvanian Future
PennFuture has long called for a serious, multifaceted local, state, and federal embrace of renewable energy in Pennsylvania. We believe it is crucial that our state divest from the environmentally harmful petrochemical buildout and refuse false solutions that merely temporarily keep the dying petrochemical industry alive. PennFuture has pointed to solar and wind power as clean energy alternatives to the dirty energy status quo. We are also monitoring other emerging technologies such as green hydrogen. We are interested in the further research and development of other clean technologies like Geomechanical Pumped Storage, and believe tax dollars are better served exploring these areas instead of keeping harmful industries afloat.
Bottom Line
As we have explained in previous blogs, green energy jobs are high-paying, reliable, and will continue into the future. Quidnet’s GPS specifically uses much of the same machinery as traditional oil and gas fracking, meaning it can provide for a smooth transition for their workers. At the same time, Quidnet’s GPS fundamentally avoids many of the environmental concerns of fracking. As traditional dirty energy wanes, it is imperative that Pennsylvania leads in the green collar revolution coming upon the horizon. Embracing alternative energy solutions will be key to building a new, green, economic present and future.
Climate | Community | Energy | Environment