It's Past Time for Pennsylvania to Invest in Renewable Energy 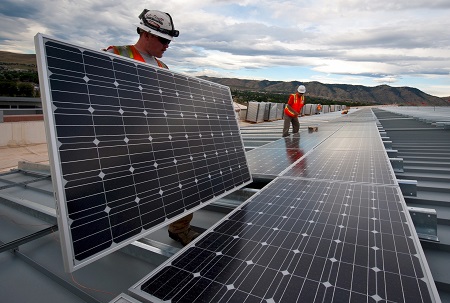 Instead of highlighting the billions in subsidies given to the fossil fuel industry over the past few decades, how it has led to the degradation of our shared environment, and the subsequent harmful effects on our health, the Majority Chairs quickly began dismissing these issues, pointing fingers at the “radical environmental left,” and scapegoating other countries.

Experts have stated repeatedly that merely pointing out that other, industrialized countries are also sources of high carbon pollution does not absolve the US of responsibility or somehow make any attempts by the US to reduce their carbon emissions meaningless. Also, many scapegoaters, including those leading the hearing yesterday afternoon, leave out key facts about these aforementioned countries.

China plans to increase their share of non-fossil fuel energy consumption to 20 percent by 2030. China is already the world leader in new installations of wind and solar power. India is increasing their share of non-fossil fuel energy consumption to 40 percent by 2030. India plans to add 175 gigawatts of renewable energy by 2022. Also, India plans to reduce emissions intensity 33 to 35 percent by 2030 based on 2005 levels. The US must do its part to reduce its carbon footprint because the average emissions for every American is eight times that of the average Indian citizen. Similarly, the emissions per person in China is only half that of the average American, and a bit more than residents of the EU. Overall, the average emissions per American are three times higher than the global average.

However, as is the position of PennFuture, the burden to curb carbon emissions is not on the average individual, but on producers and polluters -- namely the fossil fuel industry.

In February 2021, PennFuture released the third edition of our Fossil Fuel Subsidy Report. In this report, we uncovered that Pennsylvania provided $3.8 billion in fossil fuel subsidies in Fiscal Year 2019 by systematically disabling many of its standard tools for collecting tax revenues, allowing the industry to extract public resources at little to no charge, and awarding the industry grants and tax credits. Meanwhile, in the same time period, the industry imposed $11.1 billion worth external costs to the state and its residents. These facts alone plainly show the nonsensical nature of the premise of the hearing itself; it was a waste of taxpayer money that is better served being invested in our workers, our environment, and our future. It is more than clear to us that Pennsylvania’s continued investment in the fracked gas industry is harmful to workers, businesses, and the general public.

We recognize the need to secure the livelihood of Pennsylvanians, especially in this volatile time as the country as a whole begins the long road of recovery from the COVID-19 pandemic. However, we also recognize that this recovery period is a source of opportunity. Pennsylvania, as many other states and nations already have, can leap to the forefront of the new, clean energy economy and provide hundreds of thousands of high paying jobs in a diverse number of sectors for the people across this great Commonwealth.

A better path forward doesn’t lie in some far-off future, it is already here, and it is time for our great Commonwealth to seize this opportunity through heavily and seriously investing in the New Clean Economy.

A major point made by the leaders of yesterday’s hearing was how going after the fossil fuel industry would result in higher costs to the consumer and a loss of jobs for the workers in the industry. However, these leaders conveniently leave out, time and time again, that carbon-polluting jobs have been on the decline as the industry itself continues to give way to the new, clean energy economy. They also fail to mention how clean energy is, in many cases, cheaper to produce (and thus cheaper to the consumer) than fossil fuel-based energy. It would be in the best interests of labor unions and their workers alike to embrace the new economy, which offers better job security, increasing wages, and is overall beneficial to the environment and general public.

In a blog post from August about a similar hearing held in the State House, I discussed how greener, more environmentally friendly energy alternatives are already proving to not only be both cost effective for producers and consumers, but also offer higher-paying wages for those in the green energy job sector. I pointed out how wind energy prices have fallen 70% and solar photovoltaics have fallen 89% on average, according to a 2019 report. Utility-scale renewable energy prices are now significantly below those for coal and gas generation.

Experts and analysts have claimed that, with wind, solar, and storage prices falling at such a fast rate, the United States can reach 90% clean electricity by 2035 without raising customer costs at all from today’s levels, and actually decreasing wholesale power costs 10%. Jobs in solar and wind pay about 50 cents more. Specifically, wind and solar electricians (HVAC technicians, mechanics, welders and assemblers) get paid $2.50 more than their counterparts in the dirty energy space. Clean energy jobs are more likely to be union jobs than jobs across the economy as a whole – 9 percent versus 6 percent – which correlates to higher pay and better benefits.

Building new renewable energy is cheaper than running existing coal plants and prices get cheaper every year. By 2025, almost every existing coal plant in the United States will cost more to operate than building replacement wind and solar within 35 miles of each plant.

U.S. coal consumption fell 4% in 2018 to its lowest point in 39 years due to accelerating coal plant closures and reduced coal plant utilization. The electric power sector represented 93% of total U.S. coal consumption from 2007 to 2018, but over that period 68 GW of coal-fired generation (out of 313 GW in 2007) retired, capped by 13 GW of retirements in 2018.

Rocky Mountain Institute (RMI) has not only detailed the benefits of renewable energy on the nation’s economy, but they have repeatedly highlighted how Appalachia, and Pennsylvania specifically, can stand the most to gain from a Clean Energy Economy. By 2030, US wind and solar is on track to generate more than $60 billion in annual revenue—on par with the three leading US agricultural commodities: corn ($58 billion), soy ($44 billion), and beef production ($70 billion). Analysis conducted for RMI’s Seeds of Opportunity report indicates that the projected 600 GW of new wind and solar projects built between 2020 and 2030 would generate $220 billion in direct, lifetime economic benefits. This is a gamechanger for Rural America, of which much of Pennsylvania falls into.

Specifically, onshore wind and utility-scale solar projects can result in $2.7 billion in tax revenues collected by local governments annually; $2.2 billion collected in land lease payments to rural landowners hosting turbines or panels on their property; $2.3 billion in construction jobs and wages; and $3.7 billion in operations and maintenance jobs and wages, all occurring annually by 2030.
As America faces an economy post-COVID 19, the green energy sector presents an avenue to create jobs on a massive, interstate scale that includes a diverse workforce of people with varying levels of education and skill set.

In July 2020, PennFuture released a report titled A Green Stimulus and Recovery Platform for Pennsylvania which detailed how transitioning to a green energy future would preserve or create 389,000 good paying and environmentally sustainable jobs in a variety of sectors and types such as tourism, blue-collar, and white-collar jobs—including detailed steps our legislature can take to make this a reality.  Such a new economy cannot be realized without proper investment, and Pennsylvania, facing the brunt of the dying fossil fuel industry, is the perfect place to rise to the moment and invest.

Pennsylvania has a legacy of environmental damage from extractive industries including timber, oil, coal, and gas. In response, we passed a Constitutional amendment, Pa. Const. Art. I § 27, acknowledging our fundamental right to clean air and pure water and requiring that the government act as a trustee with the duty to conserve and maintain our environment and our shared public natural resources. The threats associated with climate change only add to the urgency of this duty.

Instead of doubling down on an unsustainable and dirty fracked gas industry, Pennsylvania must work to reduce dependence on fossil fuels and promote alternatives such as energy efficiency and clean renewable energy. To do so, we must align our investments with our goals and avoid unintended side effects that promote pollution and poison our communities and our workers. This is a significant undertaking, but as a start PennFuture recommends the following:

We believe Pennsylvania can build a vibrant and growing economy on clean and renewable energy. We ask our lawmakers to take the needs of all Pennsylvanians seriously, do the right thing, and lead us to that New Clean Economic future by investing in renewable energy industries and jobs.