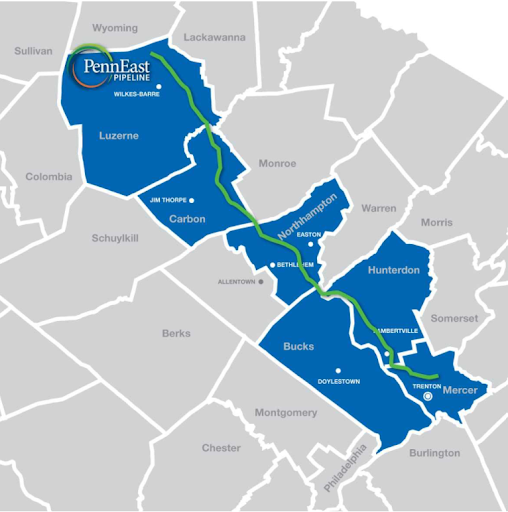 Earlier this week it was announced that the PennEast Pipeline company will cease development of its proposed fracked gas pipeline determining that “further development of the project no longer is supported.” The 120-mile, 36-inch diameter pipeline, which was slated to run from Luzerne County in northeast Pennsylvania through the Delaware River watershed to New Jersey, was unable to get all necessary environmental permits.

PennFuture responded to this announcement with relief for our environment and communities and thanks for everyone who fought against this pipeline!

The decision to cease development of the PennEast pipeline came as a welcome surprise, especially since the company just won a big case with the U.S. Supreme Court that allowed the company to use eminent domain on state-owned or controlled lands in New Jersey. We knew something was going on when, despite that win, PennEast decided to stop condemnation proceedings in both New Jersey and Pennsylvania.

Condemnation occurs when the private property is taken for public use and the landowner is given “fair market value” for that property. In 2017, we joined with Save Carbon County and others to highlight the unfair practices in which pipeline companies may condemn private lands for pipeline right-of-ways even before the pipeline route is finalized. Once condemned, the pipeline company may access the property to do surveys and may even destroy some of the natural resources on the land, like by clearcutting trees along the proposed right-of-way.

In addition, PennFuture has been concerned with the PennEast pipeline’s environmental impacts since its inception in 2014. Impacts from the PennEast pipeline would have included degradation of streams, including special protection waters; loss of high functioning wetlands; destruction of forest habitat and increased invasive species; and increased greenhouse gas emissions, among other things. PennFuture - both individually as well as with others, including our key partners Delaware Riverkeeper Network (DRN) and Clean Air Council - have submitted numerous public comments opposing the various federal and state approvals the PennEast pipeline needed.  Additionally, among other actions taken, PennFuture intervened in proceedings before the Federal Energy Regulatory Commission, and our ally DRN has brought numerous legal challenges against PennEast.

Many other local, regional, state, and federal groups fought against the destructive PennEast pipeline. As result of this strong opposition, New Jersey had recently denied critical environmental permits for the pipeline. This caused PennEast to propose to bifurcate its process and build the PA-only portion of the pipeline in phases to allow for construction to move forward, despite it being a pipeline to nowhere, as PennFuture pointed out in our comments on the “Phase One Amendment” proposal. And while PennEast has stated that it is “examining the proper next steps in the regulatory process as it pertains to the Phase One Amendment pending at FERC,” we believe that the PennEast pipeline is dead in PA.

No doubt that the sustained legal, regulatory, and outreach efforts of PennFuture and our partners resulted in the necessary delay of construction of this project. And New Jersey’s forceful recognition of the environmental harms of this pipeline and their denial of key permits was critical to PennEast inability to quickly push this pipeline through. But I don’t think we can overlook the fact that this decision came from PennEast - and not the courts. This appears to be a business decision rather than a conclusive legal holding that the pipeline cannot be built. Because we are now at a time when market forces show that investment in fracked gas is no longer as profitable as it once was, such fierce and coordinated opposition seems to be working to halt the fracked gas industry from proposing facilities that may be operating on the margins.

But Pennsylvanians cannot rely on market forces, private business decisions, or other states to protect us from harmful fracked gas and petrochemical facilities. Our Department of Environmental Protection (DEP) must do everything it can to live up to its name and protect Pennsylvania’s environment. The DEP is a trustee under PA’s Environmental Rights Amendment (ERA), Article I, Section 27 of our state constitution. The ERA puts our right to “clean air, pure water, and to the preservation of the natural, scenic, historic and esthetic values of the environment” on par with other First Amendment rights like free speech. Thus, DEP must take seriously its fiduciary obligation to “conserve and maintain [Pennsylvania’s public natural resources] for the benefit of all the people.”

To continue to issue approvals to an industry that we have seen time and time and time again destroy our environment and threaten the health and safety of our communities violates that fiduciary duty of the trustee. Rather, DEP must look critically at applications and promises made and must use its permitting process to ensure that construction and operation of pipelines will not harm our environment. DEP must continue to issue strong enforcement actions against these companies when - and in PA it appears to be when, not if - they destroy our waters, our lands, our communities.

To end on a positive note, PennFuture is very happy that the PennEast pipeline no longer seems to be a threat in Pennsylvania. This news is a huge relief for PennFuture and the impacted communities across the Delaware River watershed who have been tirelessly working to defeat this terrible pipeline. We couldn’t have gotten here without the support of our partners, supporters, and members. And we will continue to fight to protect our communities from the harmful impacts of the fracked gas and petrochemical industries.

When Profits are on the Line: The Fight Over Energy Markets
September 29, 2021

It's Past Time for Pennsylvania to Invest in Renewable Energy
October 5, 2021 by John Ukenye, Policy Analyst