November 7, 2016 by Rob Altenburg, Senior Director for Energy and Climate
Next Post

Customers who generate their own clean energy deserve a fair price.

When customers choose to install solar panels, they not only take control of their own energy spending and help produce clean renewable energy, they help their neighbors as well.  Every new kilowatt-hour (kWh) of clean energy on the grid means less pollution and the lower demand means wholesale prices are lower too.

Before our state Legislature passed the Alternative Energy Portfolio Standards (AEPS) act in 2004, customers could install solar panels, but there was no guarantee they would get a fair price if they sold 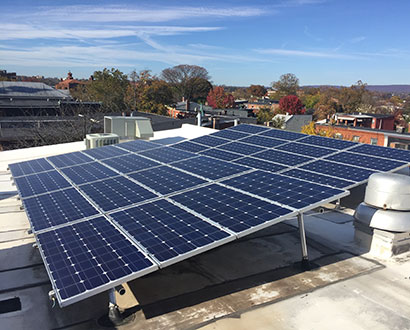 their extra power back to their utility.  AEPS changed that by allowing net metering of energy.  Now, when you generate more electricity than you use, the law requires the utility to pay you the full retail value of what you generate.  For residential customers that averages around $.13 per kWh.

Attempts to end net metering entirely have, so far, not gained traction in Pennsylvania, but in February of 2014, the Public Utility Commission (PUC) begun the process of passing new regulations that create additional  restrictions.

PennFuture has worked with a coalition of solar industry representatives, environmental groups, and interested citizens to fight this rulemaking and we’ve been successful and preventing some of the worst provisions from moving forward.  After hearing from the PUC and the opposition, the  Independent Regulatory Review Commission (IRRC) voted unanimously to disapprove  of the rulemaking on two separate occasions.  This led the PUC to drop plans to cap the size of net metered systems, but problems still remain with the PUC’s approach.

As a result of the final rule, we may see utilities seek new fees on customer generators and people may be denied interconnection in situations that the legislation allows.  Should that occur, the fight to defend net metering will have to be taken to the courts.
AEPS | Cost | Fair Market Value | PUC | Solar | Spending
Climate | Community | Energy | Environment

The Paris Climate Accord: Too Little Too Late or an Important First Step?
November 16, 2016 by Larry J. Schweiger