While We Wait on the Future to Happen

March 20, 2020 by Jacquelyn Bonomo, PennFuture President and CEO
Next Post 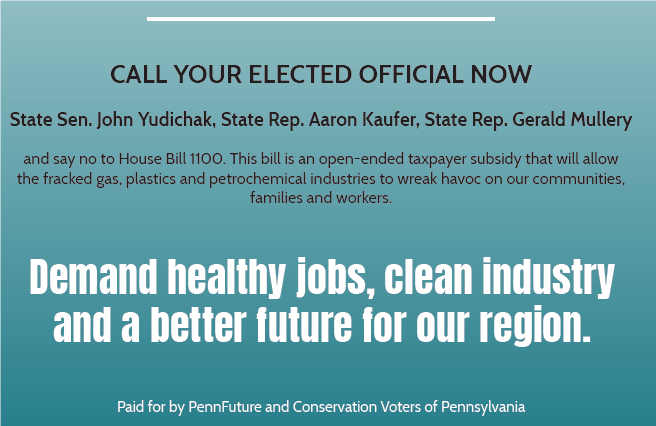 I’m struck by how, on the one hand, the COVID-19 emergency demands all of our focus and attention. Society’s collective response—and even its survival—demands us to stand down, stand back and stand away from our workaday lives to protect ourselves and our communities.

On the other hand, our government must push on aggressively—to govern, uplift, and mandate, if necessary, to address this historic health crisis. But to some extent, our government must also continue to do the people’s business because the challenges facing us before the novel coronavirus emerged as a threat are still rampant.

PennFuture was founded on the basic premise of engaging with the policy and legal institutions of the Commonwealth and giving voice to environmental matters. As a result, even under current circumstance, we simply must stay engaged, diligent and watchful of our elected actors who will be advancing important initiatives, including the state’s budget, at some point in the coming months.  As many of you who follow us know, PennFuture’s absolute priority since the beginning of 2020 has been vehemently fighting House Bill 1100, the Energy and Fertilizer Manufacturing Tax Credit, a piece of legislation that provides an open-ended subsidy for the petrochemical industry to expand here in Pennsylvania.

If it becomes law, HB 1100 will enable this highly polluting industry to grow and expand with the use of subsidies financed by Pennsylvania’s taxpayers for the next 30 years. If not stopped, this legislation will write Pennsylvania’s economic future and tie us more deeply than ever to fossil fuels, fracked gas, petrochemicals and plastics.

Along with our many allies across the state, we have mounted a fierce fight. We believe HB 1100 is rooted in corporate greed and preys not only on the largesse of taxpayers, but on the desperation of regions like northeast Pennsylvania, where family-sustaining wages and jobs are dwindling. It’s created an environment where any economic salvation, even giveaways to petrochemical manufacturers, are being embraced, despite the impacts this industry will have on our communities, health, land, air and water.

On March 9, we stood in the State Capitol with our allies in the legislature. We stood with other organizations, including grassroots folk from as far away as western Pennsylvania’s frontline communities, who are dealing with chronic pollution and are now standing against any further suffering this industry will bring if allowed to expand. We stood on behalf of over 30 co-sponsoring organizations to “Fight for Our Future.”

And while we stood, representatives from other interests stood over us—literally watching from the balcony of the rotunda—where an hour later they were to mount their own media event, in favor of HB 1100. Point, counterpoint.

What our diverse coalition of 35 groups and legislative allies did not see coming was what happened two days later. In Wilkes-Barre, 100 miles north of Harrisburg, political champions of HB 1100, representatives of specific labor unions, and friends of frackers, rallied in favor of the jobs they are being promised if HB 1100 becomes law. Jobs that will foul our air and water, kill our climate, and soak our communities in toxins, but jobs nonetheless. Our opponents’ messaging—“we’re for jobs”—went unanswered that day by those of us who also stand for jobs—jobs that also will sustain families—but jobs that will not pollute our environment and health. Jobs that center on clean manufacturing and renewable energy instead of petrochemicals.

HB 1100 has captured the imaginations and support of Republican, Independent and Democratic elected officials alike, including those beyond northeast Pennsylvania. But it’s the northeast delegation who are carrying the lion’s share of industry’s water on this fight. How is it that those same imaginations are not able to dream of a different future for Pennsylvania, one that makes major investments in renewable energy and clean manufacturing rather than relying on us fracking and cracking our way into a paycheck?

On Sunday, March 15, PennFuture and our ally Conservation Voters of Pennsylvania placed full page ads in principal newspapers in Luzerne and Lackawanna counties that urged constituents to ask exactly that question of State Senator John Yudichak (I-14th), State Representative Gerald Mullery (D-119th) and State Representative Aaron Kaufer (R-120th). Part of that ad can be seen above. These elected officials must be held accountable for this taxpayer giveaway, and whatever harm this greedy industry causes to our future.

HB 1100 has passed both houses of the legislature and has been delivered to Gov. Tom Wolf, who is expected to veto. Next, very possibly, could be a vote to overturn the veto. Who will support the Governor’s veto to kill HB 1100’s petrochemical subsidy, and who will not?

Most concerning is this: Will Republican leadership in the legislature attempt to manipulate the casting of an override vote on HB 1100—one of the most consequential pieces of legislation in years—while COVID-19 keeps the people and our voices shuttered out from the People’s House?

We must not let our guard down during this crisis, and we ask for your help by contacting your state legislator and asking them to strike down HB 1100 once and for all.

Fighting for Our Future
March 20, 2020 by Jared Stonesifer, Director of Media Relations

DEP is Asking Us to Pick Up the Bill for Waste Coal...Again
March 23, 2020 by Rob Altenburg, Senior Director for Energy and Climate