May 25, 2017 by Susanne Whitehead, Director of Donor Relations
Next Post 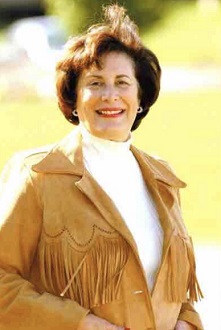 Do you ever get the feeling that someone is tapping on your shoulder, giving you that sense of urgency that there’s something more you have to do? You turn around. There’s no one there. But you felt that touch. It’s like a wake-up call. Gail K. Neustadt, author, speech therapist, longtime PennFuture supporter and member of PennFuture’s newly formed President’s Leadership Council, insists we have done that to her!

She didn’t know it then, but when she was growing up as a young girl on the west side of Cleveland near Lake Erie, Gail was already taking steps towards her future role in helping to preserve and protect Mother Earth. Gail loved to garden with her dad, and along with her two other siblings, took hikes in Metro Park. Her father was very adventurous, a former Eagle scout and guide, paratrooper and decorated WWII Major who’d been awarded both a Purple Heart and Silver Star. Her mother was a community leader active in many women’s organizations. She says both her parents were strong, positive influences, teaching her to, “love and respect both nature and animals.”

I asked her about the first time she became aware of environmental issues, and she told me that it started when she was about 5 years old. As her mom pulled into a gas station and asked the attendant to fill up the tank, Gail asked her mom about fuel. Her mother explained that gas allowed the car to move, explaining that it is food for the vehicle. Gail then asked her mother, “Where does it come from?” to which she answered, “The ground.” Since then, Gail has always looked to the earth as Mother Earth—“everybody’s mother from whence everything came.”

As she grew up, she remembers the scents and odors in her community due to pollution. Lake Erie was an absolute mess. She would be overwhelmed by the smell of rotten eggs and ask her mother about it, who would tell her: “You are smelling the industrialization of the Flats along the Cuyahoga River.” Gail’s father always wanted his children to learn more. There were tours for the River and Lake Erie so they could see firsthand what was happening.

College opened Gail’s eyes to many social justice issues, and she actually took classes with renowned child expert, Dr. Benjamin Spock. At the University of Wisconsin , everyone was very involved in the anti-war movement and she remembers that her rabbi marched with Martin Luther King.

Later, when she was married and starting her family, she and her husband moved to Upper St. Clair. She particularly remembers Cook School Road, where there were so many farms with blackberry bushes and wildflowers. She and her children would take walks, enjoying the lush scenery, picking blackberries for pie. But before long, she saw that the farms were being sold off so developers could build large homes.

As the big earth movers and trucks came in to clear the land to build those homes, Gail witnessed the diesel engine emissions hurting the fragile blackberry bushes, the cornflowers and other wildflowers. In her mind, the diesel trucks were the enemy as she loved the flowers and felt a kinship with them.  She also noticed  a similar scent—that awful choking smell that she smelled as a kid that made her nauseous.  “Look what these emissions are doing to the poor flowers.”

What brought her to Presto?

Gail moved to Presto 15 years ago to accommodate her husband’s illness. She created a very involved garden for him and during this time, she was a speech therapist and had a qualified nursing home administrative license. Gail worked on a multi-state casements project that established the current payment and assurance programs -still used in Medicare now. After her husband David was diagnosed with Alzheimers, Gail began to feel that what was happening to him, along with the rise of so many diseases, like autism, allergies, and heart conditions, were connected. Our environment was being polluted, as were we. She began writing her children’s book, Sebastian’s Tale, in which the hero is a skunk leading other animals against the land developers who are hurting the earth. Those developers and their machinery needed more energy and gas to build their McMansions, all the while destroying wildlife and their habitats.

Nine years ago, PennFuture was involved in a large convention at the Nittany Lion Inn at Penn State University to educate the public about the Marcellus Shale. Nearly1,000 people attended, from politicians, to hunters and fisherman, to average folks. Gail could not believe what could be coming to her home.  People from Hickory (the first area in the state to be heavily fracked) talked about how sick they were since fracking began, and they talked about the smells. Gail was brought back to the early days of Lake Erie and that trip to the gas station as a youngster.

In addition to writing her children’s book and fighting fracking, Gail joined the board of the nearby park and the local commissioners’ advisory team, Friends of Collier Park, and helped raise money for land preservation.

What made her decide to support PennFuture?

She says after that gathering at Penn State, she was grateful that we taught her more about energy issues; that we helped point her in the direction to learn more about ecology and what being “green” really means. Gail insists PennFuture was her wake up call to work hard for the environment.  When we asked her to join the President’s Leadership Council, she said we tapped her on her shoulder. We were her wake up call. She feels an urgent responsibility for herself, her family and her community to stand up for the preservation of our state, and our earth.

Sometimes, Gail says, it’s not easy to change people’s minds, but keeping the conversation going is key. Her own Nevillewood Community Association is going solar.

What does she love about PennFuture?

“The support PennFuture gives to communities under fire having difficulties, especially helping them legally, is very important.  The information we get out and the programs we have for green efforts, plus our work to preserve our earth—pushing renewables and educating the public, is critical.”

As part of the PennFuture Leadership Council, she says: “We are expected to help inform and educate others,” and that fits into her own goals.

Thank you, Gail, for your leadership and support.

A Climate of Conversation: Perspectives on Climate Change and Clean Energy
May 24, 2017 by Larry J. Schweiger