Demand that U.S. Steel invest in healthy communities, clean air, and jobs for the future. 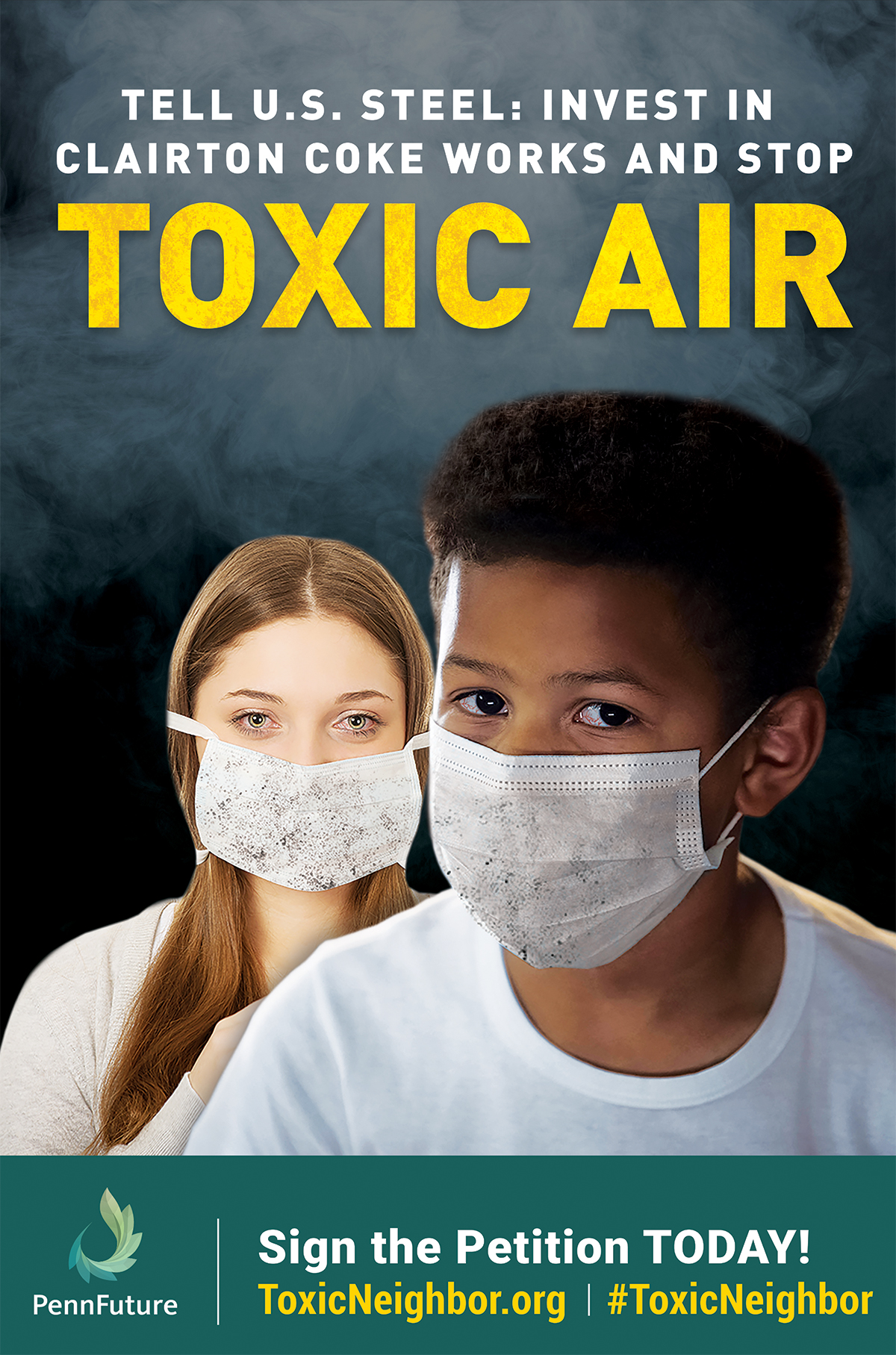 The steel industry of Pittsburgh and western Pennsylvania has played a significant role shaping the region’s economy and culture. It also has, and will continue to have, an enormous impact on the quality of the air we breathe.

The problem is that the air we breathe is the eighth worst in the country, according to a recent report by the American Lung Association.

A major source of pollution in the Pittsburgh region can be traced to U.S. Steel’s Clairton Coke Works, southeast of the city. This facility still uses equipment that dates to the 1950s, so it should be no surprise when that equipment malfunctions and breaks down.

And that’s exactly what keeps happening at the plant.

A fire on Christmas Eve in 2018 damaged Clairton Coke Works’ desulfurization unit, causing sulfur dioxide exceedances multiple times in the span of a few months and releasing 9.3 million pounds of sulfur dioxide into the air in the months that followed. This is nine times the amount of sulfur dioxide emitted during a regular operating year at the plant.

To make matters worse, another fire occurred on June 17, 2019, less than two weeks after repairs from the Christmas Eve fire were completed. Two fire are two too many.

Those two fires aren’t the only indicator that the plant is unreliable. To that end, the Allegheny County Health Department has fined U.S. Steel a total of $2.6 million since June 2018 because of ongoing air pollution violations stemming from the Clairton Coke Works.

It’s clear that U.S. Steel will never be a good neighbor in the region until it addresses the antiquated portions of its coking operation that are the sources of ongoing violations.

On May 2, U.S. Steel announced plans to invest $1 billion in the company's Mon Valley Works. This investment allows U.S. Steel to spin a false narrative about improving air quality in the region, but the truth remains - the money will not address the chronic pollution and public health threats emanating from Clairton Coke Works’ old and antiquated batteries. Until the company fixes or retires those batteries, the region’s health will continue to suffer. It’s just that simple.

To that end, PennFuture has documented more than 6,700 air quality violations between January 2012 and May 2015 alone. This is a total of polluting an average of five times a day for three and a half years. U.S. Steel currently has no intentions to do anything about the source of those violations - batteries 1, 2 and 3 at the Clairton Coke Works.

The time for change is now.

It is time for U.S. Steel to invest in Clairton Coke Works more than the current investment plans call for. Clairton Coke Works’ long history of toxic pollution -- caused by a combination of the sheer age of the Works and its multiple failing components – can no longer be addressed through bite-sized fixes or expensive investments that do nothing to combat the real problem.

3. Commit to public transparency about plant operations, especially in cases of emergency.

After the Christmas Eve fire, the only public notice issued about potential health threats came from the Allegheny County Health Department. Not a single word from U.S. Steel to community members in the days and weeks after the fire.

The same can be said for the second fire in late June. The Allegheny County Health Department quickly notified the public, but there wasn’t a single piece of correspondence from U.S. Steel.

Other Ways To Take Action and Join the #ToxicNeighbor Campaign

Don’t forget to tag @PennFuture and tell us if you’ve taken any of our actions, seen our ads, or attended one of our tabling events.