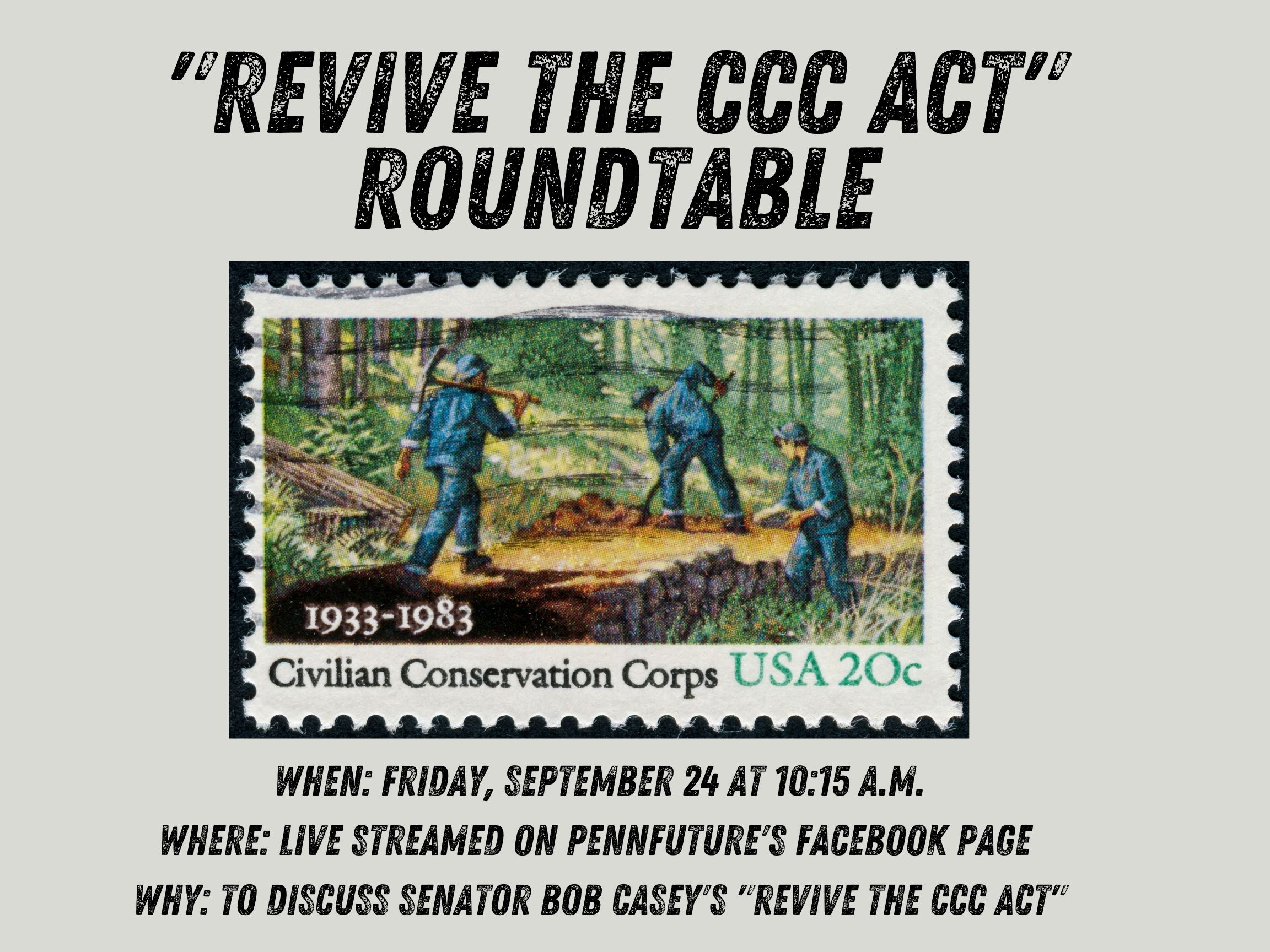 PHILADELPHIA, Pennsylvania — Earlier today, U.S. Sen. Bob Casey, in partnership with PennFuture and other leading environmental advocacy organizations in Pennsylvania, called on Congress to pass a bill recently introduced by the senator that would revive the Depression-era Civilian Conservation Corps.

Called the “REVIVE the CCC Act of 2021,” Sen. Casey’s legislation will advance our nation’s efforts to tackle the climate crisis while creating well-paying, quality conservation jobs which protect and restore the health and resiliency of our communities. Sen. Casey introduced the bill in the Senate in late July, while a companion bill was introduced in the House of Representatives in early September.

To bring attention to this vitally important legislation, Sen. Casey and PennFuture hosted a roundtable discussion in Philadelphia’s Discovery Center in Fairmount Park on Sept. 24.

During a keynote address, Sen. Casey explained why he is spearheading the effort to bring back a modern-day Civilian Conservation Corps.

“A renewed Civilian Conservation Corps (CCC) would advance our Nation’s efforts to tackle the climate crisis while restoring our natural resources and investing in our workforce,” Sen. Casey said. “That is why I introduced the REVIVE the CCC Act, which would revitalize the 1930s-era Civilian Conservation Corps into a modern-day employment, job training and conservation program. I applaud PennFuture for their work leading the charge to ensure Pennsylvania is at the forefront of mitigating the climate crisis.”

In addition, U.S. Rep. Dwight Evans (PA - 3)  — who is a co-sponsor of the House of Representatives’ companion bill to Sen. Casey’s legislation — said a revived Civilian Conservation Corps has the chance to make significant impacts on both our local, state and national economies, as well as our shared environment.

“This bill has the potential to provide much-needed employment and job training for young people from Philadelphia and across the country, while also dealing with the climate crisis that has been on dramatic display recently,” Rep. Evans said. “The local input for the projects would be from urban as well as rural communities, and would include environmental justice issues, improving air quality, transportation, access to green space and safe housing. As Pennsylvania works to recover from the pandemic, we must ensure that we Build Back Better by investing in good-paying green jobs.”

PennFuture President and CEO Jacquelyn Bonomo, who served as moderator of the event, added that a revived Civilian Conservation Corps has the potential to benefit each of the nearly 13 million people who call Pennsylvania home.

“A revived Civilian Conservation Corps will have far-reaching benefits for anyone who calls Pennsylvania home, from urban areas like Philadelphia and Pittsburgh to our mid-sized towns and rural areas in between,” Bonomo said. “This program is uniquely positioned to restore and reclaim our greatest assets — Pennsylvania’s abundant natural beauty and natural resources — all while putting people back to work with family-sustaining wages. By investing in our environment, economy and communities in Pennsylvania that have historically been burdened disproportionately by pollution, a revived Civilian Conservation Corps is a common-sense solution to combat the interwoven crises we face together as a Commonwealth.”

Pennsylvania Department of Conservation and Natural Resources Secretary Cindy Adams Dunn participated in the roundtable discussion and said a revived Civilian Conservation Corps is exactly what’s needed to meet the moment of combating the climate crisis while also creating employment opportunities across Pennsylvania.

“We are still reaping the benefits of the work of the Civilian Conservation Corps in Pennsylvania and across this nation nearly 80 years after the completion of the program,” Dunn said. “The historical significance and long-term impact of the CCC is undeniable. Its legacy of enhancing and protecting our natural resources, providing jobs to young people, and laying a foundation for a sustainable future shows us the possibilities when we invest in preserving our ecosystems. We are at a critical juncture where our modern climate and sustainability challenges require creative, innovative solutions. Creating a civilian climate corps is a step we must take to ensure a better future.”

Finally, PowerCorps PHL Executive Director Julia Hillengas has seen firsthand the power of a civilian climate corps to change lives, and she is excited to see how Sen. Casey’s bill can be turned into action.

"Hundreds of young people from all walks of life have come to PowerCorpsPHL at a moment of economic uncertainty and used their experience with us — a civilian climate corps with equity and workforce development baked into its design — to chart a path to the future they want for themselves,” Hillengas said. “Civilian climate corps tackle both pressing and too-long deferred climate resiliency projects to mitigate flooding, keep our air and water clean, cool cities in the summer, make green spaces accessible to all, and use energy smartly while also strengthening unions and small businesses with trained local talent, giving structure and a clear mission to public-private sector collaboration, and providing opportunities for folks to be tax payers, home owners, and community leaders. The best part: With 130 existing climate corps across the country and dozens more communities already primed to start a climate corps, we're ready to go!”