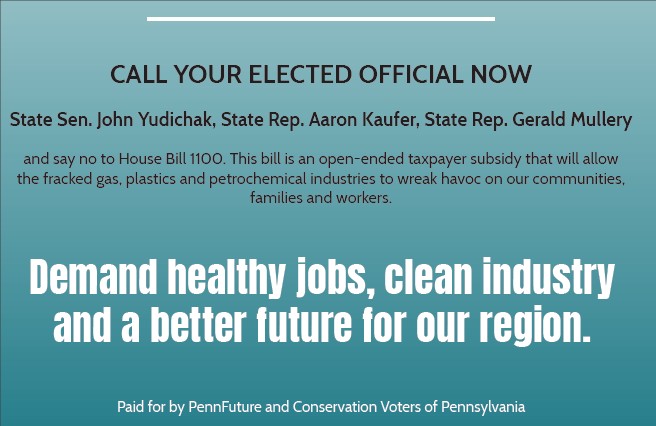 Harrisburg, Pa. (March 9, 2020) - PennFuture and 34 other organizations from across Pennsylvania joined together Monday in the Capitol rotunda to speak in a unified voice against House Bill 1100.

That bill, passed by the General Assembly on Feb. 4, offers billions of dollars in taxpayer subsidies to the fracked gas and petrochemical industries over the next 30 years. During the rally, a mix of state legislators and environmental leaders urged Gov. Tom Wolf to veto this dangerous bill, and also urged the General Assembly not to attempt to override that veto.

More than 100 people packed into the rotunda Monday morning to demand that our lawmakers stop using taxpayer handouts to incentivize the fracked gas and petrochemical industries. Specifically, House Bill 1100 provides a subsidy for petrochemical-related projects in Pennsylvania that is expected to average $22 million per facility per year through 2050.

For those in attendance Monday, such an enormous subsidy is unacceptable when the return on investment will include pollution, sickness, and environmental degradation.

Jacquelyn Bonomo, the president and CEO of PennFuture, said at the rally that Pennsylvania’s leaders should no longer rely on heavy industry for prosperity.

“No industry is entitled to an open ended tax credit,” Bonomo said. “The entitlement mindset of this industry is unacceptable to communities who refuse to be soaked in toxins in exchange for jobs. The days where Pennsylvanians must accept pollution in exchange for progress must come to an end. Neighboring states are building their economic futures around renewable energy and clean manufacturing.  They will reap the benefits of the new economy while Pennsylvania fracks and cracks its way into a future of dirty air, polluted water and sickness.”

For her part, Innamorato said that HB 1100 isn’t in the best interests of Pennsylvanians.

“HB 1100 proposes Pennsylvania taxpayers pay for the privilege of being poisoned by industrial pollution. This bill asks us to prop up corporate profit margins in an uncertain and volatile global market. Courting petrochemical development with no plan to recoup that investment pits our public health, public dollars, and public goods against private profits. We need coordination, clarity and transparency on the true costs of subsidizing these industries and operations. We need a commitment from our public officials to protect our health and promote true prosperity,” she said.

Sen. Katie Muth said that if enacted, House Bill 1100 could have harmful ramifications for generations of Pennsylvanians.

“HB1100 seeks to drastically expand the gas and petrochemical industries across Pennsylvania at a time when we need exactly the opposite. Our Commonwealth should already be transitioning to clean, renewable energy, but the majority of the General Assembly continues to fail to address the climate crisis. HB1100 is another bill perpetuating corporate welfare for the fossil fuel industry, an industry that only prioritizes their profits, not the health, well-being, or safety of workers, the public, or the environment. We have a constitutional right to clean air, land, and water. If HB1100 becomes law, it will have harmful ramifications for generations. I stand in solidarity with those who are asking the governor to veto House Bill 1100.”

Veronica Coptis, the executive director of the Center for Coalfield Justice, said the billions of dollars in taxpayer subsidies being offered in HB 1100 could be used for so many other projects and causes.

“When schools in our rural communities are struggling to keep class sizes low, pay teachers, and provide buses for students to get to-and-from school; when unaffordable housing is driving people of color from their historic homes; when parents can’t afford to go to work because of the cost of childcare; when our public water systems and roads are failing and impacting people’s health and safety; and when people everywhere struggle to find secure, good-paying jobs that support their families without making them and those in their communities sick, this legislation represents not just an irresponsible policy, but an immoral one,” Coptis said.

For Larry Schweiger, the chair of the Climate Reality Action Fund, Pennsylvania’s lawmakers should be incentivizing clean and renewable energy, not dirty fossil fuels.

"Turzai’s HB 1100 is a boondoggle for the fracking industry. If Pennsylvania lawmakers were serious about creating good paying jobs they would do what New York did by investing in clean energy. For about $1.5 billion, New York spawned 40,000 renewable energy jobs where $1.6 billion in the cracker plant will create 300 to 600 jobs post construction,” Schweiger said.

Briann Moye, an environmental justice organizer with One Pennsylvnaia, said HB 1100 is an unacceptable giveaway for an industry that doesn’t have Pennsylvanians’ best interests in mind.
“HB 1100 is just another giveaway to an industry that our communities have already sacrificed so much for -- our homes, our children, our health and our well-being. Enough is enough. Governor Wolf, you must veto this legislation. And to our Legislators in the House and Senate -- you must not override this veto. We are not asking. We’re demanding this,” she said.

Josh McNeil, the executive director of Conservation Voters of Pennsylvania, said there are far more pressing concerns in Pennsylvania than subsidizing the fracked gas and petrochemical industries.

“Why should a state that cannot afford to protect its children by getting lead and asbestos out of our schools give hundreds of millions of dollars in tax breaks to some of the largest corporations in the history of the world?" McNeil asked.

Joseph Otis Minott, the executive director and chief counsel of the Clean Air Council, said bold action is needed to combat the climate crisis, and Pennsylvania’s leaders should not offer more handouts to the already heavily-subsidized gas and petrochemical industries.

"At a time when bold action is needed to combat the climate crisis, HB 1100 offers 30 years of expensive handouts to the gas and petrochemical industries, which are already heavily subsidized. It would lock Pennsylvania into decades of toxic pollution and increased greenhouse gas emissions. We cannot afford to waste potentially hundreds of millions of dollars trying to attract heavy polluters to the commonwealth when, instead, we need to be investing in clean, renewable energy and taking steps to reduce climate pollution,” he said.

For Matt Mehalik, the executive director of the Pittsburgh-based Breathe Project, Pennsylvania must stop subsidizing the petrochemical industry with billions of dollars of taxpayer handouts.

"As people concerned about the future of the Ohio River Valley, we clearly see that petrochemical development is the wrong path for our community.  Our region has battled economic disinvestment following generations of heavy industrial development with a subsequent burden of cleaning up. One of the lessons we have learned is that life and health are precious,” he said.

Maya van Rossum, the leader of the Delaware Riverkeeper Network, said that Pennsylvanians have a constitutional right to clean air, pure water, and a healthy environment, and the government should be seeking to uphold these rights, not seeking to give a tax break to the highly polluting fossil fuel industry.

“House Bill 1100 is an unnecessary shale gas promotion bill. We do not need to incentivize petrochemical and shale gas fueled energy plants when we should be moving to a clean energy future, and we do not need more fracking, more pollution from shale gas development, more processing of petrochemicals to make the plastics the globe is drowning in or more chemicals and fertilizers to pollute our land and water,” she said.

Steve Hvozdovich, the Pennsylvania Campaigns Director for Clean Water Action, said that spurring growth for the oil and gas industry is a direct contradiction to the path we should be taking if we’re serious about tackling climate change.

"Our legislature is offering a vision for the future that fails Pennsylvanians by “rolling out the red carpet” for climate polluters that have worked for more than a decade to weaken environmental protections,” he said.

Rachel Filippini, the executive director of Group Against Smog and Pollution, said Pennsylvania needs to break its addiction to fossil fuels, not encourage the expansion of the gas and petrochemical industries.

“Pennsylvania should be actively working to reduce our dependence on fossil fuels, instead this large giveaway to the fossil fuel industry is a step backwards that puts businesses working on renewable energy projects at a disadvantage,” she said.

“House Bill 1100’s huge tax credit will ensure wealthy petrochemical companies pay far less than their fair share of taxes, keeping hundreds of millions of dollars in much needed tax revenue out of state coffers. If that isn’t hard enough to swallow, these industry handouts will lock Pennsylvania into more gas development, more pipelines, and more pollution for decades,” she said.

Other quotes from environmental and civic groups across Pennsylvania include:

"Continuing down the path of fossil fuels and their poisonous byproducts is an act of violence against the people of Pennsylvania. 2,600 years ago, the prophet Ezekiel wrote, "In you are people who take bribes to shed blood." As the industry continues to overwhelm our elected officials with unlimited campaign contributions, unlimited gifts, and heavily funded lobbyist pressure, we must recognize that HB 1100 is just one more example of our government siding with the bribers and their violence, over the people and our peace." Michael Pollack, director of March on Harrisburg

“The Climate Reality: Philadelphia and Southeastern PA Chapter stands in solidarity with citizens across Pennsylvania in protest of HB 1100, a misguided bill that would seriously worsen the climate crisis for Pennsylvanians and our surrounding region. Pennsylvania lawmakers should be transitioning our state away from fossil fuels, not funding their expansion.”

“It’s a great relief that Governor Wolf has publicly promised to veto this bill. HB 1100 would give away $800 million in taxpayer dollars to expand the oil and gas-fueled petrochemical industry and throw open the doors to a continuation of climate and health-harming pollution for decades to come,” said Leann Leiter, Ohio and Pennsylvania Field Advocate for Earthworks. “The Governor’s veto also provides a second chance for legislators who initially voted in favor of this fossil fuel tax give-away -- many from southwestern PA districts where oil and gas pollution and health problems are already rampant.  By supporting the Governor’s leadership against this reckless corporate handout, our legislature has a fresh opportunity to make the right decision and put Pennsylvanians’ health, climate and quality of life ahead of oil and gas and plastic company profits.”

"HB1100 is a classic example of privatizing profits and socializing costs while drastically increasing the speed limit on the highway to climate catastrophe."  Barb Jarmoska, director, Responsible Drilling Alliance/Keep It Wild

“We at Tuesdays in Harrisburg are local voters who are particularly attached to breathing fresh air, consuming safe water and enjoying the healthsome environment of “Penn’s Woods”. As such, we are flabbergasted that the legislature of the Commonwealth of Pennsylvania is considering providing active, substantial support to a private industry clearly positioned to damage all the above amenities in pursuit of doubtful, at best short-term, benefits. Our future, the health and future of the people of Pennsylvania, and indeed our earth itself, cannot withstand the onslaught of abuse we presently hurl at our environment. Enabling these insults by subsidizing more fossil fuels, more non-biodegradable plastics and more greenhouse gases─all to the benefit of corporate interests well positioned to protect themselves─is the wrong direction to travel. Pennsylvania should be transitioning away from fossil fuels, not funding their expansion. Pennsylvania should transition toward –and offer subsides for--clean and green jobs and technologies. We urge you, our families urge you, to ensure the defeat of House Bill 1100. Say “no more!” to subsidies for fossil fuels!”

###
PennFuture is leading the transition to a clean energy economy in Pennsylvania, fighting big polluters with legal muscle, enforcing environmental laws, and supporting legislative policy that protects public health. PennFuture is engaging and educating citizens about the realities of climate change, and giving them the tools needed to influence lawmakers on the issues. Visit www.pennfuture.org for more information.
Contact:
Jared Stonesifer
Director of Media Relations
stonesifer@pennfuture.org
412.456.2372