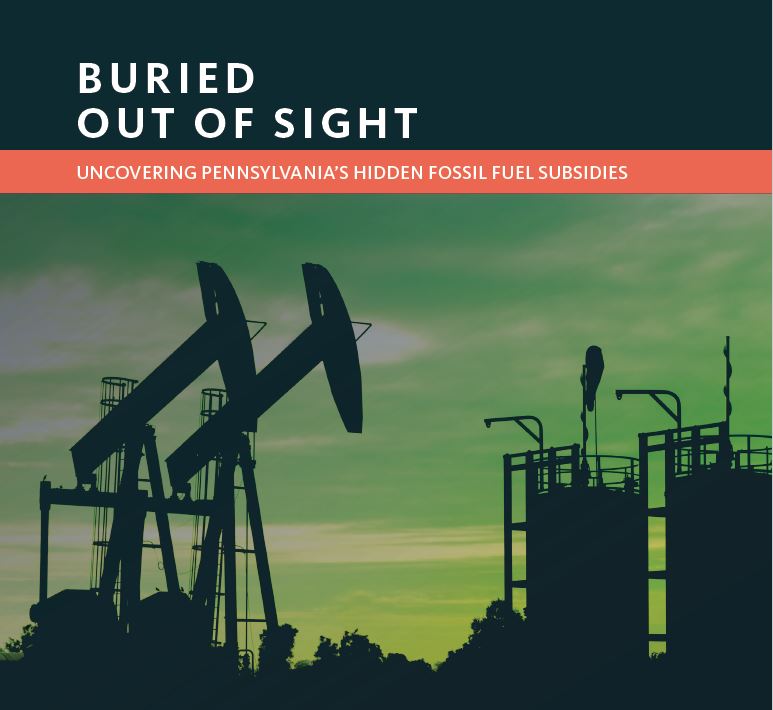 Earlier this month, a widely shared report from the Ohio Valley River Institute highlighted how the jobs that were promised for rural Pennsylvania from natural-gas companies never really materialized. It confirmed what many environmentalists and progressive activists had been saying for years ever since natural-gas drilling, aka fracking, took hold in Pennsylvania and Appalachia: that investing and boosting fracking would not pay off for Pennsylvanians in the long run.

Now, a new report from statewide environmental group PennFuture details just how much the commonwealth has invested in natural gas and other fossil fuel companies and how those tax breaks and subsidies are under renewed scrutiny.

According to the report, Pennsylvania had about $3.7 billion in foregone revenue in 2019 thanks to tax breaks provided by the Commonwealth. Combine that with another $118 million in direct state spending in support of fossil fuel companies, and it totals about $3.8 billion for 2019.

PennFuture says that is a 14% increase compared to previous analyses the group conducted in 2015.

“It is our responsibility to act on climate and to provide a stable world for future generations,” says PennFuture president Jacquelyn Bonomo in a press release. “We need to move away from fossil fuels and that means ending the massive subsidies that prop up these industries that foul our air and water, and damage our climate on a daily basis.”

Of the $3.8 billion counted by PennFuture, about $2 billion was captured by the natural gas industry. In 2020, the year after the data analyzed in the report, Pennsylvania created more tax breaks for fossil fuel companies. A tax break program for petrochemical companies will provide a maximum of $6.7 million a year to a maximum of four companies a year. Petrochemical companies refine natural gas into plastics and other products. The incentive program would begin in 2024 and last until 2050, meaning a potential of about $670 million in tax credits could be handed out over the lifetime of the bill.

One petrochemical facility currently under construction in Beaver County, the Shell cracker plant, was granted $1.6 billion in tax breaks over 25 years. It is permitted to emit 2.2 million tons of carbon dioxide each year, the equivalent of adding more than 480,000 cars to the Pittsburgh region.

This year, the Pennsylvania legislature is struggling to find funding for a myriad of state responsibilities, thanks to drops in revenue caused by coronavirus.

Will Delavan, an associate professor of economics at Lebanon Valley College, provided an external review of the report. He says he was surprised to see such a large amount of tax breaks given to natural gas and fossil fuel companies, given how often those industries claim to be the most competitive energy option in the market.

“Before I read this report, I had no idea how much and in how many ways the fossil fuel industry bills taxpayers, and I imagine citizens don’t either,” says Delevan. “The massive subsidies and tax breaks result in higher prices for consumers and ultimately higher taxes, resulting in less public spending on things we truly care about like schools, public health and defense.”

PennFuture is calling for policies that would shift the playing field of tax breaks in Pennsylvania, including a severance tax on natural gas companies. Renewable energy — like wind and solar — has seen large growth in states like Oklahoma and Texas, but while solar has been growing relatively fast in Pennsylvania, renewable energy is still a very small share of the energy produced in the commonwealth.

“This report offers alternatives that level the playing field between dirty energy and other deserving sectors,” says Bonomo, “and we offer solutions that could restore $2 billion to state and local budgets while also preparing Pennsylvania for the inevitable shift to a clean energy economy. Now is the time for state policymakers to act.