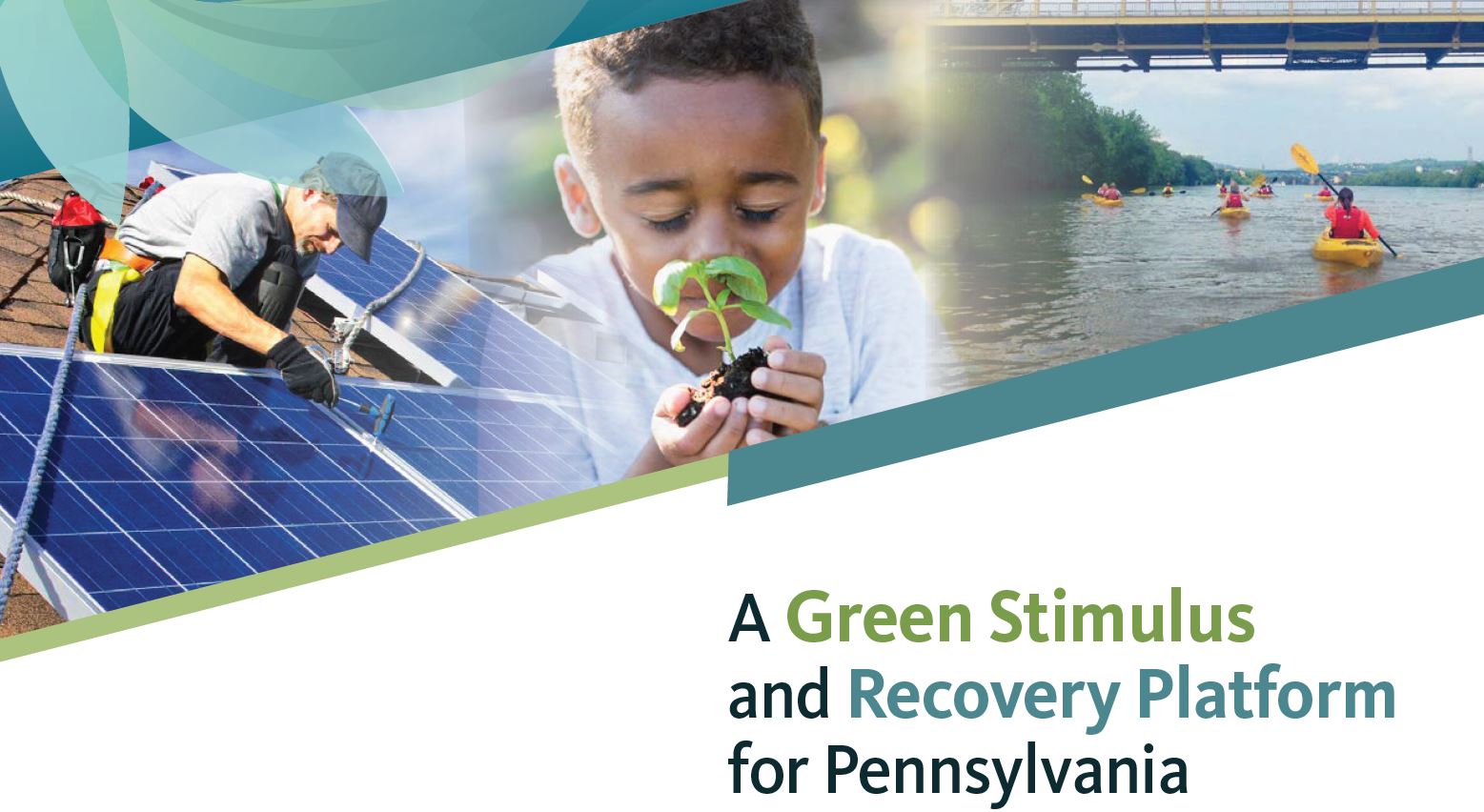 It’s abundantly clear that these are unprecedented times, and that our leaders in all levels of government will have to spend the next several years advancing economic and public health solutions that spur our economy towards recovery.

That’s why PennFuture released today a strategic roadmap to guide our leaders to implement a green stimulus recovery plan for Pennsylvania. PennFuture is Pennsylvania’s leading environmental advocacy and watchdog organization with five offices across the Commonwealth.

This 50-page report lays out specific policy recommendations that leverage Pennsylvania’s growing nature-based, clean energy, and low-carbon industries to put people back to work and build a more resilient and sustainable economy.

All told, PennFuture’s policy platform is estimated to amount to $2.8 billion in investments, which would preserve or create as many as 389,000 jobs in the Commonwealth, including nearly 37,200 shovel-ready jobs, while also reducing pollution, promoting our natural resources, and advancing public health.

The report has four overarching goals that guide each recommendation made within the document: safely restart Pennsylvania’s economy in a way that reduces pollution and is protective of human health, avoid state budget cuts that will harm our businesses and slow recovery, target short-term investments that provide family-sustaining wages, and advance long-term investments to support sustainable infrastructure and industries that contribute to resilient, clean and profitable communities.

“Our recommendations in the report are many and varied, but we staunchly believe they collectively provide a clear vision for recovery and economic stability in Pennsylvania,” said PennFuture Executive Vice President and Chief of Staff Matthew Stepp. “It’s clear that Pennsylvania is at an inflection point. We either pursue old and tired methods of recovery that rely on slashing budgets and public sector jobs, or we chart a new direction that creates a new and sustainable economy while serving the dual purpose of addressing the climate crisis.”

According to a recent study from Oxford University that analyzed 700 separate stimulus policies from the Great Recession, projects that focus dually on economic recovery and reductions in greenhouse gas emissions deliver higher returns on government spending both in the short and long term.

Our leaders also cannot turn to industry to jumpstart this recovery. Carbon dioxide emissions skyrocketed by 5.1 percent in 2009 when America’s economy finally started to bounce back from the Great Recession. It is indisputable that Pennsylvania, similar to the rest of the world, is at a critical juncture where we must make concerted and dedicated efforts to drastically cut our carbon footprint immediately.

"After generations of relying on polluting and toxic industries to grow the state's economy, it's time for Pennsylvania to chart a new path,” said Madeleine Smith, a clean water advocacy campaign manager for PennFuture and a lead author of the report. “This report identifies tangible policy actions Pennsylvania can take to recover from the COVID-19 economic crisis and lead the way towards a more sustainable economy. The age of fossil fuel reliance is over and the time for clean energy is now."

Specifically, PennFuture’s report builds on the success of the former Civilian Conservation Corps that employed 3 million people during the Great Depression. The report calls for the creation of a Pennsylvania Conservation and Economic Recovery Corps, which would employ tens of thousands of Pennsylvanians by repairing and improving parks, trails and other natural resources across the Commonwealth.

The report reaches beyond the success of the CCC to identify strategic and abundant job creation opportunities - employing thousands of people to plug the hundreds of thousands of abandoned drilling wells, incentivizing the clean energy industry instead of doling out subsidies to fossil fuels, and investing in clean transportation and double down on a clean-energy economy that already employs more than 90,000 people in the Commonwealth.

“The choice to implement a green recovery for Pennsylvania is ours, and the chance to emerge from this historic challenge as better, cleaner, more resilient Pennsylvania is at our fingertips. Here’s to hoping our elected officials are listening,” Stepp concluded.

To view the report in its entirety, please click here or go to www.pennfuture.org/greenstimulus.