Can solar power save rural America? 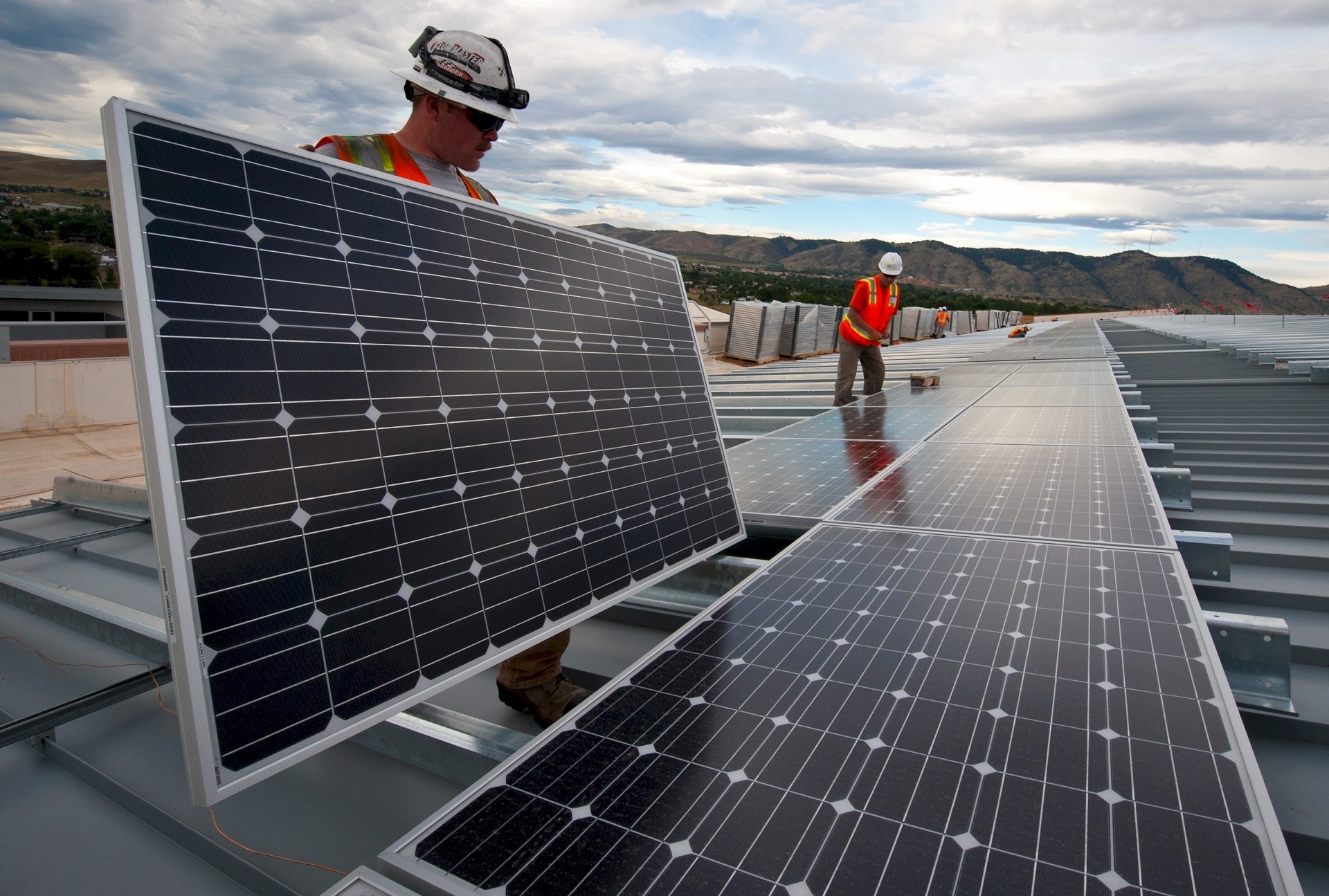 Can solar power save rural America?
By Rachel Wagoner

The sun is shining in Pennsylvania and Ohio. At least, solar developers hope so. They’re flocking to the two states, seeking out land leases and pitching projects that would put more renewable energy onto the grid.

Solar development is touted as a win all around. It’s not extractive. It’s renewable. It allows farmers and landowners new opportunities to make money from their properties.

It’s almost reminiscent of the natural gas boom a decade ago. Because of that, landowners are being cautious, but it could be a new lease on life for the family farm.

Where did this growth come from? It’s not like Pennsylvania suddenly got flatter or Ohio got sunnier.

To understand what’s going on now, it’s helpful to look back a little bit. Historically, Pennsylvania and Ohio have been fossil fuel states. Coal, oil and natural gas has been available and abundant enough to make those energy sources cheap.

In Pennsylvania, coal still makes up 39% of its annual energy production, although nuclear power is right behind it at 34%, according to the U.S. Energy Information Administration. Natural gas is at 24%.

Coal is what powers Ohio, with 66% of energy production coming from coal. Natural gas is in second place with 17%.

Renewables make up less than 1% of annual energy production for both states.

State began creating renewable portfolio standards as a way to diversify energy resources, encourage economic development and promote domestic energy production. That spurred the growth of renewables nationwide, but Pennsylvania and Ohio were a little slow to catch on.

Pennsylvania established its Alternative Energy Portfolio Standard in 2004. The standard required 18% of the state’s energy to come from alternative sources by May 2021. Of that 18%, 8% would have to come from renewables, with half a percent coming specifically from solar photovoltaic systems.

For a while, companies were allowed to buy energy from out-of-state solar systems and that counted toward the portfolio standard. The rules were changed in 2017 to limit the credits that could come from out-of-state solar. The cost to install solar photovoltaic systems had also gone down, significantly. That’s when things got kick-started in Pennsylvania.

For utility scale solar, the installation cost per watt was around $6 in 2010, according to the most recent National Renewable Energy Laboratory quarterly benchmarking report. By 2019, it was just above $1 per watt.

At the same time, the federal tax credit program for new solar systems is set to expire in a couple years. The tax credit dropped from 30% of the cost of the system in 2019 to 26% this year. That number will drop again to 22% next year and go down to 10% in 2022 for commercial installation and cease to exist for residential systems.

“I think there might be a rush to the finish line mentality,” said Eric Romich, an energy development field specialist with Ohio State University Extension. “Let’s get it built while we can get tax credit.”

There are more than 200 community solar projects in 41 counties across Pennsylvania in the pipeline waiting for legislative action, according to a recent analysis by the PA Community Solar Economic Alliance.

Community solar would allow people who don’t have solar access for whatever reason to tap into solar power, said Rob Altenburg, director of PennFuture’s Energy Center, an environmental advocacy group.

Maybe they live in a shaded area, they rent, they don’t have the roof space or they move around a lot. Altenburg said between 50-75% of households in the state don’t have solar access for one reason or another.

Here’s how community solar works. Someone builds a centralized solar system in a neighborhood or a community. They sell or lease shares of that system to families or businesses in the area. Then whatever energy generated from that system will appear on the family or business’s electric bill as a credit, “like it would be if it was on their rooftop,” Altenburg said.

It could be a solar developer that puts in the system, or it could be an electric cooperative or even a community group.

Right now, the way the laws are written, community solar is not possible in Pennsylvania. But House Bill 531 and Senate Bill 705, both introduced by Republicans, would change that. The bills have bipartisan support, Altenburg said.

“Developers are going in and getting options for siting so they can start a system as soon as they’re able to start a system,” Altenburg said. “They see the business opportunity there so they’re getting ready.”

In 2019, the now-infamous House Bill 6 eliminated the solar carve-out for the standard and reduced the renewable energy goal to 8.5% by 2026. (House Bill 6 was also the nuclear bailout legislation that led to ex-House Speaker Larry Householder’s bribery scandal).

To put it in perspective, current solar arrays in Ohio generate about 280 megawatts of power.

Most of this development is happening in southern Ohio, particularly the southwest corner, Romich said. But leasing activity is happening everywhere across the state, he said.

That would suggest there’s potential developments that haven’t been submitted to the state yet, Romich said.

The projects are taking up a lot of land. There are three projects under construction right now in Brown and Hardin counties that would generate 520 megawatts of power, on 6,495 acres of land.

It takes about 7.9 acres to generate a megawatt of power using a solar photovoltaic system, Romich said.

That means opportunity for farmers and other landowners. Leasing land for a solar development could mean 20-30 years of income, possibly more.

There are a lot of similarities between gas and solar leases, but that’s a key difference. Solar leases generate income each year for the length of the lease, regardless of production. This is unlike a gas lease where there’s typically a lump sum payment up front and payments afterward based on production.

Romich said he’s heard of farmers being offered anywhere from $700 and acre to $1,400 an acre in Ohio. Pennsylvania State Extension educator Dan Brockett told Farm and Dairy in a July story that he’s seen offers ranging from $300 to $2,000 an acre.

That sort of consistent, predictable income could be a game changer for a struggling farm. It can also impact future generations of farmers on that land, for better or worse.

The vast land impact is also what makes solar developments unpopular with some communities.

“It changes the look of the landscape,” said Tom Murphy, director of the Penn State Marcellus Center for Outreach and Research.

Compared to a gas well pad that’s on 5 acres, a solar array could take up hundreds of acres, he said. Some people view them as eyesores.

Romich said there are also concerns from other farmers or landowners about solar developments impacting land values and the affordability of land.

“There are some areas where fairly good ground is being considered,” he said. “Others in the community are looking at it and saying, ‘well, if you take that out of commission, then that drives up land values elsewhere.’”

Historically, solar arrays have taken agricultural land out of production. But people are finding ways to work in concert with solar developments, said Sharon Pillar, executive director for the Pennsylvania Solar Center, a nonprofit that helps businesses and groups get access to solar. It’s called agrivoltaics.

Murphy said he’s seen or heard of this done in a variety of ways. Mostly common is solar grazing. That means planting a grass-legume mix under the panels and grazing sheep there through the grazing season.

Murphy said he’s heard of people growing vegetables under panels or grapevines. There could also be scenarios where hay is produced under panels.

Solar arrays can be fixed-tilt, meaning they stay in one position, or tracker, meaning they move on an axis to track the sun as it moves across the sky. There are more opportunities for agrivolatics with tracker panels. They could be moved as needed to allow for farm equipment to go around the panels.

With solar power also comes jobs. Most people think of solar installers, but there are many people before and after them, Pillar said.

A study by Ohio University, released on Aug. 28, pointed to this. The analysis found that if Ohio added 2.5 gigawatts of power, which is roughly equal to the proposals before the Ohio Power Siting Board right now, it would create 18,039 jobs. These would be one-time construction phase jobs, but there would also be 207 annual operations and maintenance jobs supported over the life of the systems.

This would also mean $3.2 billion in economic impact during the construction phase, and a $54 million impact over the life of the systems, the Ohio University study found.

Time will tell if solar can deliver on all of its promises. Murphy and Romich said they’ve noticed that landowners and people in rural communities are understandably wary of solar leases and development companies.

The shale gas and horizontal drilling boom is still fresh in people’s minds, but energy leases are something many landowners in Ohio and Pennsylvania are used to. Vertical gas and oil wells and mining operations dot the landscape of the two states.

It’s not black and white or good vs. evil, in comparing solar power to fossil fuels though.

“I think there’s probably bad actors in every bunch. There are definitely things farmers and landowners want to protect themselves against,” Pillar said. “I think we’re seeing a lot of good actors trying to do this in a mindful way and working with communities and landowners.”