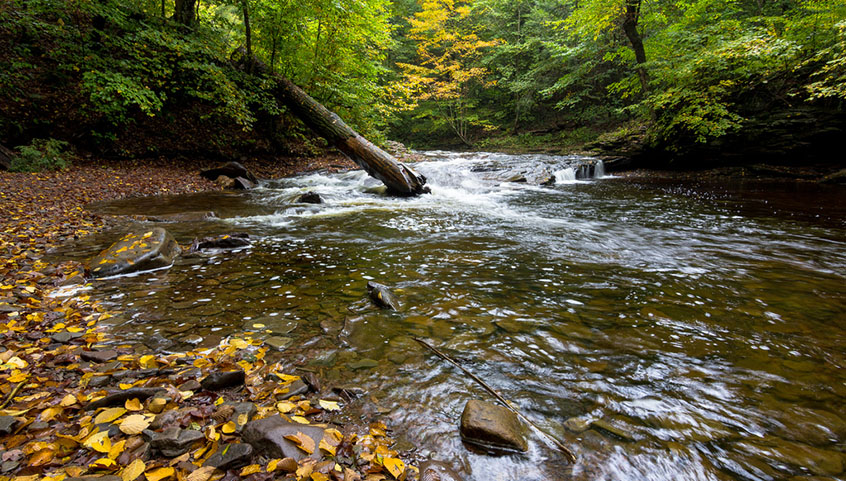 The lower Tohickon Creek, located immediately downstream of the dam at Lake Nockamixon, was designated as part of the Lower Delaware National Wild and Scenic River in 2000. Located in Bucks County, the Tohickon flows through protected lands like Ralph Stover State Park and provides some of the best recreational opportunities in the area, especially for seasonal whitewater enthusiasts.

Almost 25 years ago, the Tinicum Conservancy petitioned to have the lower Tohickon Creek redesignated to an “Exceptional Value” stream to recognize and protect its outstanding water quality. The Pennsylvania Department of Environmental Protection is the agency tasked with reviewing the petition. Unfortunately, DEP’s initial recommendation was to downgrade the lower Tohickon’s designated use in 1997. In response and since that time, Tinicum Conservancy, Delaware Riverkeeper Network and others have repeatedly given DEP numerous data, reports, and information supporting the petition for EV designation. Despite these efforts, earlier this year, DEP issued another draft redesignation recommendation which again proposed to downgrade the protections for the creek.

A quick primer on stream designations: In Pennsylvania, surface water is given a “designated use” which is established based on the ecological and human health uses of a particular waterbody. A designated use is the water quality goal set by the state, whether or not that use is actually being attained. In the case of the lower Tohickon, it is currently designated as a “Cold Water Fishes” waterbody.

The good news: In response to this public outcry, DEP stated that it has agreed to undertake further analysis of the Lake Nockamixon Dam to see how operational or infrastructural changes could affect its analysis.

We have to be vigilant to protect the lower Tohickon Creek – and all the waters of the Commonwealth – not only from pollution, but from regulatory rollbacks that threaten to remove protections and degrade our waters.

Become a PennFuture member today and support our work on protecting our constitutional right to clean water.

In the Headlights - 2020
August 30, 2019 by Jacquelyn Bonomo, PennFuture President and CEO