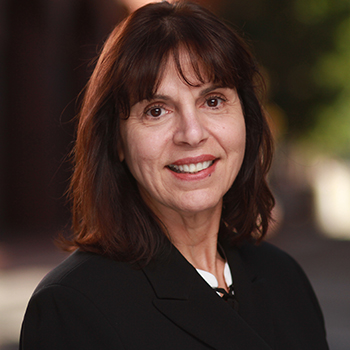 Jacquelyn Bonomo brings a career’s worth of national environmental leadership, personal activism and conservation efforts to her role as President and CEO of PennFuture. Prior to her promotion to this role, Bonomo served as the organization’s Executive Vice President and Chief Operating Officer, with expert oversight of PennFuture’s departmental operations, vendors and contracts, fiscal planning and fundraising, as well as grant initiatives and strategic planning. During this time, she led PennFuture to stability on many levels, assembling a strong team of staff members while successfully managing finances and operations.

Prior to joining PennFuture’s executive team, Bonomo served as executive director of the Chesapeake Bay Funders Network. There, she led the development of communications and policy frameworks to ensure accountability within the Environmental Protection Agency’s pollution reduction plan, convened thought leaders to solve problems and identify opportunities for network investments ranging from strategies to implement innovative best management practices, to investments in land protection, agricultural and stormwater arenas, to developing next generation programs in agriculture and capacity building.

Bonomo’s state expertise stems from nine years as vice president of conservation programs for the Western Pennsylvania Conservancy, where she led budgeting, planning and the administration of the largest natural resource conservation program in the region, with staff in eight different locations. With her oversight, the conservancy increased its forest and water protection program and science operating budget over the course of eight years from $1 million to $5.7 million, while growing staff from 11 to more than 80 through 2007. Jacqui successfully won several multi-million dollar grants from major foundations, numerous large individual gifts and government grants and contracts.

Bonomo also has 13 years of experience in various leadership positions with National Wildlife Federation, working with 24 states and territories from Portland, Oregon and Washington, D.C. locations. She has also previously served as executive director and vice president of the Maryland and D.C. state program of the National Audubon Society.

While Bonomo has worked throughout the country and traveled the world, she never strayed far from her roots. She is devoted to her extended family in Hazleton. A former whitewater guide, she still enjoys paddling, hiking and biking, bird watching, and fly fishing as well as learning Italian.